That’s right, dear reader, you’ve read that correctly.  I’m writing a book!  I’ve officially signed a contract with Claremont Press to write a book for their Religion & Comics series!  The volume will explore the prophetic dimension of modern superhero comic books.  Ahhhhhh, I’m SO EXCITED about this project and I can’t wait to share it with everyone!

END_OF_DOCUMENT_TOKEN_TO_BE_REPLACED

Jason Aaron’s time writing Thor – from Thor: God of Thunder to Thor to The Mighty Thor to Thor (again) to War of the Realms to King Thor – produced the defining version of the character.  No one, at least in my humble opinion, has ever done more with Thor nor understood the character, their world, and its theological fertility more than Jason Aaron.  Jane Foster lifting Mjölnir to become Thor herself was the heart of Aaron’s run.  But for that to happen, Thor Odinson had to find himself unable to lift the hammer.  This idea – the idea of Thor being unworthy – ties together much of what Aaron did.  Its seeds were sown in his very first arc, as Thor faced the brutality of Gorr the God Butcher.  Its actualization would lead to Jane lifting Mjölnir and becoming the mightiest Thor and the greatest of all the gods.  Its effects would culminate in Thor Odinson’s climactic battle with Malekith the Accursed during the War of the Realms and it would shape the sort of king Thor would become.

END_OF_DOCUMENT_TOKEN_TO_BE_REPLACED

The centerpiece of Jason Aaron’s epic seven year run writing Thor: God of Thunder/The Mighty Thor/Thor was Jane Foster lifting Mjölnir when the Odinson found himself unworthy to do so.  She became Thor, the Goddess of Thunder, and the stories that followed were the best Thor comics I’ve ever read.  It may be the best executed single story arc I’ve ever ready in any comic ever.  When the Odinson eventually reclaimed his title as the God of Thunder, Jane returned her focus to her civilian life, medical career, and – most importantly – fighting the cancer raging inside her.  However, her superhero career was far from over and the stories Jane Foster now finds herself in (written first by Jason Aaron and Al Ewing and now by Jason Aaron and Torunn Grønbekk) dance along the mysterious, wonderous, frightening, sacred threshold that is the dividing line between life and death. END_OF_DOCUMENT_TOKEN_TO_BE_REPLACED

Phoebe Waller-Bridge’s Fleabag is one of those shows where I wonder how I lived without it.  My first time through the series (I watch it often), I watched all of Season One in a day and Season Two the following day.  My pause between them was only to allow myself time to try and process all the feelings the first season left me with.  The show is hysterical while also being one of the most moving shows I’ve ever seen.  It’s wildly intelligent and the emotional journey it takes you on is unforgettable.  Returning to this was one of the first things I did when quarantine hit – it’s a thoughtful comfort show, making me laugh, think, and feel in equally strong waves.  As I watched it, I realized I’d never written about my love for this series, something I want to do now with this reflection on a remarkable juxtaposition done in the fourth episode of the second season.

Note, there will obviously be spoilers (but not beyond S2,E4).  I’ll be as general as I can be with the plot but if you haven’t seen this show maybe watch it now?  I don’t wanna be bossy but it’s brilliant.  Every.  Single.  Moment. END_OF_DOCUMENT_TOKEN_TO_BE_REPLACED

One of my favorite Doctor Who tropes is the use of alien creatures to explain legends and myths (as well as integrate these creatures – in a very Doctor Who-esque way – into the show).  We’ve seen a Haemovariform crash-land on Earth and be mistaken for a werewolf in Scotland in 1879 (S2,E2).  There was a band of Saturnyns creating vampire-like “brides” for their remaining male population in 1580 Venice (S5,E6).  The reason beings on most planets are instinctively afraid of the dark is explained with the presence of the flesh-eating Vashta Nerada, who we see as the dust in sunbeams (S4,E8).  The occasional movement we see flicker, out of the corner of our eye, when we look in mirrors is the “daughter” of “the Family of Blood,” forever trapped in all mirrors by the Doctor (S3,E9).  The list goes on.  But the one most fascinating to me is when the Doctor and Rose encounter “the Beast.” END_OF_DOCUMENT_TOKEN_TO_BE_REPLACED

Are you ready for something exciting?!?  If not…you should totally stop reading this right now because this post has some CRAZY EXCITING STUFF about to come your way.  Here comes the aforementioned excitement.  The wonderful folks from Gods Among Geeks invited me on their Neekology 101 podcast to talk about Avengers: Age Of Ultron.  We chat about the theological implications of artificial intelligence, explore the twin forces of hubris and guilt that motivate Tony in this film, geek out on all things MCU, and even talk a little about the point and purpose of art.  In addition to getting to hear me instead of reading my words you also get the chance to follow their blog and podcast if you don’t already.  So you should totally click here or here or here or – if you missed those chances – here and then you can listen to me on Neekology 101: Episode #31 Remember the Age of Ultron? (and yes, that was another link I hid there because I want you to listen to this). END_OF_DOCUMENT_TOKEN_TO_BE_REPLACED

I was honored yesterday to travel with a group of my students to Washington D.C. to participate in the March for Our Lives.  Like the movement itself, the entire trip was their idea.  They wanted to go.  They organized it.  They talked to administration.  They found chaperones.  They figured out the busing and worked to raise the money.  I was there because they asked me to chaperone and I was proud to march alongside them.  I’ve had people asking me what it was like or about pictures I took or things like that.  At the end of the day, I seemed to be able to say more with this short reflection than I could with anything I’d put on a Twitter or Facebook post. END_OF_DOCUMENT_TOKEN_TO_BE_REPLACED

Jason Aaron began his run writing Thor: God Of Thunder by introducing the villainous Gorr the God Butcher.  For millennia Gorr travelled the cosmos, killing all immortal beings he encountered in the most macabre fashions he could imagine.  The story is obviously rich with theological implications, considering both the nature and purpose of our ideas of the divine as well as introducing the question that will form the core of Aaron’s run to date – what is a worthy god?  In preparation for a paper I’ll be presenting on Jason Aaron’s use of the Divine Feminine in The Mighty Thor at the ACA/PCA Conference on Popular Culture next month, I’ve been reading all of Aaron’s work with Thor (both Odinson and Jane Foster).  My research also led me to many articles interpreting Aaron’s work as a sort of atheistic manifesto, something I felt warranted further discussion. END_OF_DOCUMENT_TOKEN_TO_BE_REPLACED 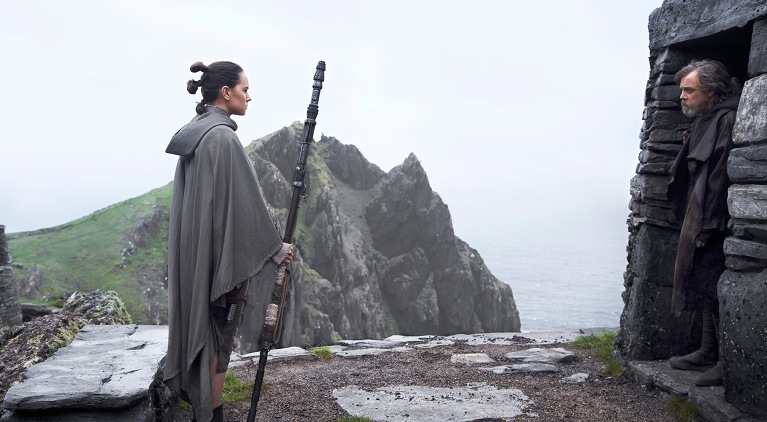 When I came out of my first showing of The Last Jedi, I was ready to say I liked it.  By the time I exited my third showing of The Last Jedi, I was ready to say I really liked it.  I was still struggling to figure out where to place this film in my larger emotional and intellectual experience of the Star Wars Saga but I was able to say, as a film, The Last Jedi was well done.  I was not ready for the heatedly divisive storm that followed.  As someone who needed a year and a half to be able to like The Force Awakens, I certainly appreciate the pain many feel over this film.  I’m just a bit surprised, given reactions to The Force Awakens, this film caused such an uproar.  Anyway, I’m finally ready to delve into my thoughts and feelings on The Last Jedi.  Be warned MASSIVE SPOILERS WILL FOLLOW.  So if you haven’t seen it, I suggest you come back and read this once you have. END_OF_DOCUMENT_TOKEN_TO_BE_REPLACED

Remember a month ago when Hyperspace PodBlast had Hannah and I on to discuss our Star Wars class?  I know!  It was so fun!  Well Charlotte and Caitlin of Skytalkers: A Star Wars Podcast heard the episode and they invited Hannah and I on their show to talk about our class too!  Yay!  We had so much fun chatting with them and, if you’re in the mood for some great Star Wars banter, you should totally click this link and head on over to Skytalkers to give it a listen.  BONUS – you’ll also learn which five people associated with Star Wars (fictional or real, alive or dead) Hannah and I would invite to a dinner party!!  Um, what are you still doing here?  It’s time to click the link and enjoy the show! END_OF_DOCUMENT_TOKEN_TO_BE_REPLACED