I started this li’l series a while ago, when I finally read Dan Abnett and Andy Lanning’s Guardians Of The Galaxy run, the comics that inspired James Gunn’s films.  I had so much fun writing about my experience of meeting the Guardians in that way, as I continued my journey through their comics, I did another post about Brian Michael Bendis’s time writing the title.  Naturally, next up is Gerry Duggan.  I feel enough time has passed (now that we’re seven months into the Donny Cates run) that I can thoughtfully reflect on Duggan’s vision of the team.  For me, this ended up being a shocking-yet-classic example of the truth of being careful what you wish for… END_OF_DOCUMENT_TOKEN_TO_BE_REPLACED

In synergetic anticipation for the “most ambitious crossover event ever,” Marvel Comics first gave Gerry Duggan the reins of Infinity Countdown and now Infinity Wars – a yearlong event replacing their regular monthly Guardians comic and bringing the Infinity Gems Infinity Stones back into existence in the Marvel Universe.  I’m sure it was an attempt to make what was happening in the comics mirror their cinematic bonanza, Avengers: Infinity War, and thus hopefully attract new readers.  However, unlike their literary masterpiece Secret Empire, this has been a HUGE miss for me. END_OF_DOCUMENT_TOKEN_TO_BE_REPLACED

With the arrival of Ryan Reynolds second outing as the Merc with a Mouth in theatres this weekend, everyone obviously has Deadpool on the brain (and what a weird, wild, wonderful experience that is).  As I’m no exception, I figured it’s time to talk about Deadpool 2!  I mean, why not, right?  What really makes Deadpool 2 so exceptional is how it gives us everything we love about Wade Wilson while taking the story in a brand-new direction.  It also adds all sorts of new characters, characters who will surely have a lasting impact on Mr. Pool’s future.  While I’ll discuss character outlines and sketch out the plot in general below, NO MAJOR SPOILERS WILL FOLLOW.  Coolio?  Coolio. END_OF_DOCUMENT_TOKEN_TO_BE_REPLACED

When I returned to comics in 2015, one of the first trades I read was Brian Posehn and Gerry Duggan’s hardcover collection Deadpool (Vol. 1), containing the first twelve issues of their run going back to November 2012.  It was a Christmas gift from Kalie and my first real experience of the Merc with a Mouth, outside of occasionally seeing him as an X-Force villain back in the ‘90s.  I was instantly in love with the character!  Posehn and Duggan’s take became the primary lens through which I view the Regeneratin’ Degenerate.  With The Despicable Deadpool #300, Gerry Duggan ends his five-year run on the title.  Over the years the tales have gotten darker and darker, as he’s broken Wade Wilson to a painful degree.  As I read these stories my heart hurts, and I can’t help but wonder why do we partake in stories where the characters we love are damaged so severely? END_OF_DOCUMENT_TOKEN_TO_BE_REPLACED 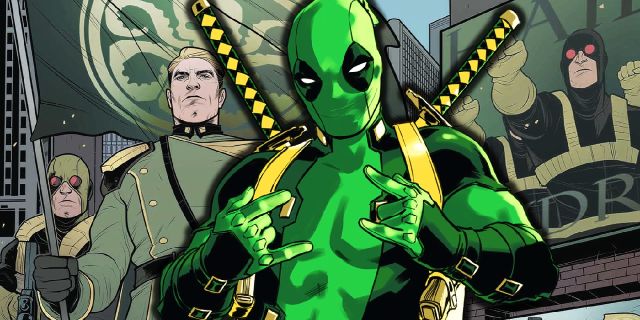 I’m about to write a line I never expected to write.  Are you ready?  Gerry Duggan, Mike Hawthorne, and Matteo Lolli’s Deadpool is the best Secret Empire tie-in I’ve read.  By far.  Without question.  No contest.  Now, I love me some Deadpool!  But with Sam Wilson: Captain America and Steve Rogers: Captain America and Champions and all the one shots (Uprising, Underground, and United) being on my pull list, I never thought ol’ Wade Wilson’s tale would be the best.  But it is!  Deadpool presents the everyman’s tale inside this massive, emotionally-heavy crossover event.  It shows Secret Empire from the perspective of the “regular person” trapped within this system, struggling against the banality of evil growing around them while having no choice but to play their part in the new regime. END_OF_DOCUMENT_TOKEN_TO_BE_REPLACED