By Nancy of Graphic Novelty2

As Women’s History Month draws to a close, I am concluding our Fiction’s Fearless Females series with two Star Trek friends, Doctor Beverly Crusher and Counselor Deanna Troi. This is the fourth year that Kathleen and I have participated in this series and joining us is Michael of My Comic Relief, Kalie of Just Dread-full, and Jeff of The Imperial Talker.  What is wonderful about this series, is there are no winners, as each woman featured is fabulous and ALL are deserving of praise!

Star Trek is my favorite fandom, as many of the posts on my blog revolve around the movies, television and web series that have been inspired by the original classic. While some of my previous posts were about the iconic Lieutenant Nyota Uhura and the indomitable Captain Janeway, here I picked a duo who were on the series The Next Generation, which is the series that forever cemented me as a Trekkie. Many of our FFF posts this year have centered around female friendships, so these two women aboard the Enterprise-D came immediately to mind.

The Next Generation was the first Star Trek to feature a brand new crew (there had been Star Trek: The Animated Series in the 70s and there had been the movies, but both utilized the original crew) so establishing a new set of characters is a fraught move, as you want everyone to work well together. And while I could wax poetic about my favorite Trek show’s crew, I want to feature the two characters that ended up standing out to me.

Hanging out when off duty

Authentic friendship representation in books, tv shows and movies is scarce. Perhaps you have heard of the Bechdel Test, which is a measure of the representation of women in fiction. It asks whether a work features at least two women who talk to each other about something other than a man. So often the only time you see females interact is because it somehow revolves around a man, or the women are being snarky and undermining one another. I think there is more effort nowadays to represent female friendships, but when this show was on the air from 1987 to 1994 it was still rare.

Doctor Beverly Crusher was introduced as the ship’s doctor, a widowed mother whose teenage son Wesley later became an ensign on the ship. Counselor Deanna Troi was a half-alien empath who gave counsel to Captain Picard and offered much-needed counseling to the crew during their long space journies. The first season was a bit dicey, establishing the tone of the show and fleshing out the characters and how they related to one another. The character of the doctor was off the ship during the second season, but once back on during the third season and onward, Crusher and Troi’s friendship developed in a believable manner.

At this time IRL, I was in high school and college and developing my own female friendships, some of which were fleeting, while others I still have to this day. I have seen females support one another, and others backstab one another, but in this ideal, Crusher and Troi rocked their friendship. Sure there were times that they met to talk about men (the below picture of them meeting to exercise showcased a bawdy conversation between the two that was refreshing to hear) but talking freely and without judgement is a true indicator of the realness of a friendship.

Meeting to exercise and gossip

Another plus with these women is their development in their professional life on the Enterprise. The actresses were hired partly because of their beauty and their potential to be love interests (Crusher with Captain Picard and Troi with Commander Riker) but they were able to grow as officers on the ship. Both characters retained their original jobs, but got command experience and moved up in ranks during their tenure on the Enterprise. And they supported each other as they moved through the ranks.

I have been blessed with some wonderful friendships, many of them lasting for decades, and I realize that it takes time and effort to maintain them. But I truly think watching women who developed a genuine friendship and who supported one another, during a critical time in my life, helped shape my ideas of the worthiness of prioritizing friendships and extending kindness to others.

Crusher was at Troi’s side when she married Riker

Star Trek presents an idealistic and Utopian future, with Earth moving past its racial and cultural differences, and ready to explore space. The tagline was “Space: the final frontier. These are the voyages of the starship Enterprise. Its five-year mission: to explore strange new worlds. To seek out new life and new civilizations. To boldly go where no man has gone before!”.  And boldly go it did- the series has given us many iconic friendships (both male and female)- and seeing people look for connections and community in the future is something we can all aspire to.

Live Long and Prosper, my friends.

My post is the last in this year’s series, so make sure you check out the previous entries:

Please give them a follow to catch their posts as all have great content outside of #FFF! 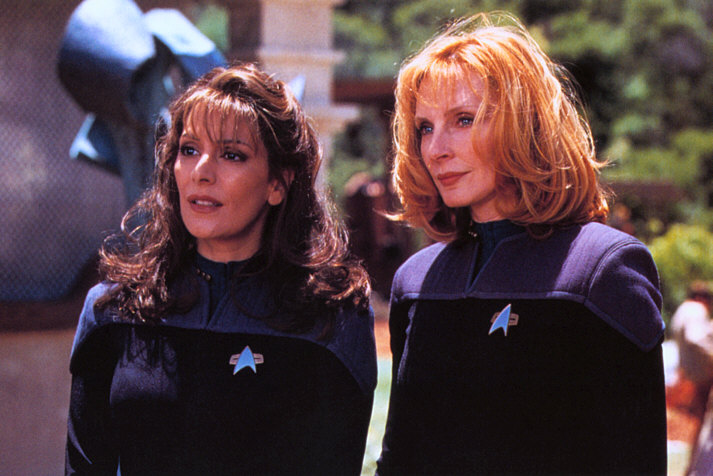 Thank you to Nancy for this excellent piece and for bringing another year of Fiction’s Fearless Females to a close! To read more of Nancy’s work, head over to Graphic Novelty2for a posts on everything in the world of graphic novels, from superhero stories to Manga to fantasy to memoirs and other works of nonfiction – and also, obviously, STAR TREK stuff ;D. They have it all!