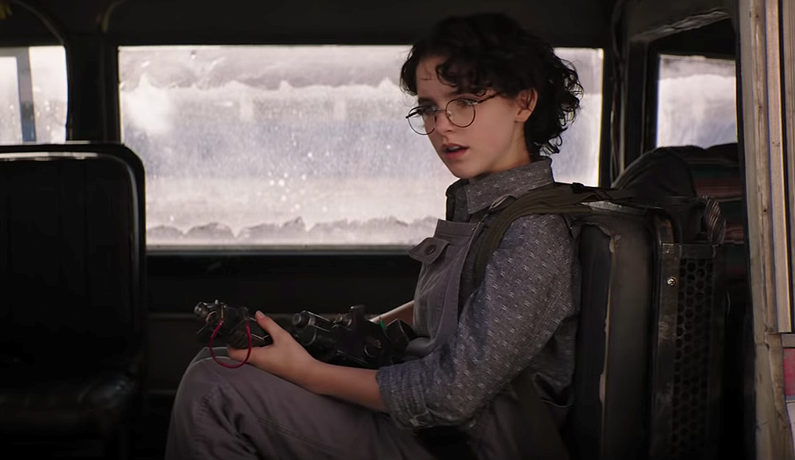 Obviously I’ve been eagerly awaiting the trailer for writer/director Jason Reitman’s Ghostbusters: Afterlife to drop.  The original Ghostbusters (1984) is my all-time favorite movie.  I not only watched it all the time as a kid but I still watch it all the time as an adult.  It’s consistently been bringing joy to my life, and I’ve consistently watched it multiple times every year, for over thirty years!  I don’t have that relationship with any other film – not Avengers, not (500) Days of Summer, not any of the Star Wars movies.  Also, I enjoy Ghostbusters even more as an adult because now I get all the jokes!  So not only do I love this movie but it keeps getting better for me.  Of course then, when I heard Reitman was making “a direct sequel” to his father’s iconic 1984 film, I was intrigued.  So much could go right!  But so much could go wrong too.  Now the trailer’s here and I’m feeling…lots of things.

But, before we get to all those feelings, let’s watch the trailer again!

As I’ve written in more detail before in other pieces, while I’ve seen Ghostbusters probably a zillion times, I had a tricky relationship with Ghostbusters 2 (re: it scared the hell out of me for a loooooooooong time (seeing it was a traumatic part of my childhood (which you can read about here!))) but I’ve since come to love and appreciate it.  While it can never be as close to my heart as Ghostbusters, I now really do enjoy Ghostbusters 2 too.

Then 2016 brought the needlessly controversial Ghostbusters (2016) or, as it’s more commonly known now, Ghostbusters: Answer the Call.  This reboot saw Kate McKinnon, Leslie Jones, Melissa McCarthy, and Kristen Wiig take over for Bill Murray, Dan Aykroyd, Ernie Hudson, and the late Harold Ramis, as New York’s professional paranormal investigators and eliminators.  Anyway, as is almost always the case in our post-2000s world, there were people who became irrationally angry that women were now doing the job male characters once did and they were very loud about this displeasure.  As a result, almost all the conversation about the film settled on this controversy as opposed to actually talking about the film itself.  Now, I do grant only Kate McKinnon seemed to really get the chance to craft a unique character in her Jillian Holtzman, with McCarthy and Wiig playing versions of characters they’d played before.  And I do grant the criticisms of some of the racial stereotypes in Jones’ Patty Tolan are fair (the tokenism being one of many things satirized in the original and it not feeling as helpful here).  Still, I think it was a funny movie that deserved more credit than it got.  I also think it absolutely deserved a sequel because I think, learning from some of the mistakes of the first, that cast could have really grown in another film.

So, part of me feels weird about Ghostbusters: Afterlife because I feel it sort of robs Ghostbusters: Answer the Call from ever getting the proper sequel it deserves.

But I also feel really, really weird about Ghostbusters: Afterlife because we’ve lost Harold Ramis.  Egon Spengler was always my favorite Ghostbuster and I just don’t know how I feel about a Ghostbusters movie without him.

For years and years and years and years (and years (…and years!)) I would jump on any scrape of a rumor about a third Ghostbusters movie.  Any comment Dan Aykroyd would drop in an interview about a script or idea or whatever was exciting!  I know Bill Murray, famously (or infamously, depending on your point of view), was the reason they never got back together.  He felt the original was brilliant.  The second didn’t work.  So why keep going back and sullying the memory of the original?  Just leave a classic alone.  They always said, if everyone – meaning all the principle cast and Ivan Reitman, as director – didn’t agree on a sequel, they wouldn’t go forward (and how do you do a Ghostbusters movie with Pete Venkman off the scene?).  It was all or nothing, which I can appreciate.  So then, when Harold Ramis passed away in 2014, I believed a direct sequel to Ghostbusters and/or Ghostbusters 2 was never going to happen.  I was ready to move on.  And while I wished Ghostbusters: Answer the Call was a direct sequel to the original, set in the same universe with a new team taking over, I was ready to see where the future would go with a new team of Ghostbusters in a new “movie universe,” as it were.

Why the Ecto-1 doesn’t have the paint job it did in Ghostbusters 2 anymore is something we’ll just have to wait to find out with the movie I guess. / Photo Credit – Ghostbusters: Afterlife

But now we’ve got Ghostbusters: Afterlife.  And I guess I don’t really know what to do with it.

I mean, I’m really disappointed Ghostbusters: Answer the Call has been abandoned by the studio.  And I can’t imagine seeing Peter Venkman, Ray Stantz, and Winston Zeddemore doing their thing without Egon…especially when there were decades where they could’ve done it again with Egon.  So there’s a little part of me that will always be a little resentful of that.

But I can’t say Ghostbusters: Afterlife doesn’t look intriguing.  I was really excited by the trailer!  Obviously we didn’t get a look at the original cast at all.  You’re not going to blow that big reveal in the first teaser trailer for the film.  Still, I was hit with a serious wave of the feels when it became clear that Carrie Coon’s Callie, McKenna Grace’s Phoebe, and Finn Wolfhard’s Trevor are Egon’s daughter and grandkids!  And when Phoebe finds Egon’s Ghostbusters jumpsuit?!!?  Ahhhhhhhhh!!!!!!!!!!  SO MANY FEELS.

Then we have Paul Rudd’s Mr. Grooberson telling the kids all about Gozer’s invasion of New York in the ‘80s and he even shows the kids “news” footage from the first movie.  As if that wasn’t good enough, then they play one of Bill Murray’s iconic lines (is that fair to say? what line in this film isn’t iconic?)  as a voiceover.  As soon as I heard, “Call it fate…call it luck…call it karma…I believe everything happens for a reason” – SO MANY FEELS AGAIN.

They are clearly hitting all the nostalgic buttons on the nose.  When I realized the trailer had dropped this morning I did the responsible thing.  I called Hannah (who is every bit as big a Ghostbusters fan as I am) to come up from her office, stopped my Religions of the World course, and we all watched the trailer together (twice).  Hannah’s emotional reaction was probably even stronger than mine.  In fact, the kids were worried she was going to start crying XD.  But it’s the Ghostbusters!  C’mon!

But I am intrigued by all the non-nostalgic bits as well.  The original story – the Midwest setting, Egon’s family trying to get their life back on track, Mr. Grooberson being a Ghostbusters fan when the rest of the world has forgotten or begun denying it ever happened, whatever the heck is going on in that li’l town – is something I already want to know more about.  I love that it’s Phoebe who seems to most clearly follow in her grandfather’s footsteps because it at least brings some gender balance to the film.  The scene of her firing the proton pack while Trevor drives Ecto-1 around their town is so awesome!!!!

As everyone’s observed, yep, it totally has a Stranger Things vibe.  Also, as everyone’s observed, there’re no jokes (save Trevor’s one about the summer they all died under a table) in the trailer.  And yes, it looks like it dabbles pretty directly in the horror aesthetic.  We spent some time discussing that in my class this morning.  I maintain that’s completely in line with the originals.  Ghostbusters 2 scared me so much as a kid it was straight-up scarring.  Like, I’d run out of the room whenever it would show up on TV.  And while I loved Ghostbusters, I think the main reason I had a fear of dogs as a kid was because they refer to the gargoyle monsters the Gatekeeper and the Key Master inhabit before they posses Sigourney Weaver’s Dana Barret and Rick Moranis’ Louis Tully is because they keep referring to them as “dogs” in the film.  So yeah, they were freaky enough in their own right.  Regardless, I’m intrigued by the trailer’s tone as well.  Pretty much everything they offer up here has me interested.

So yes, I’m sad Ghostbusters: Answer the Call didn’t get a direct sequel.  And yes, I’m very sad the official sequel to Ghostbusters 2’s (because Mr. Grooberson tells the kids no one’s seen a ghost in thirty years so that takes us back to 1989 and Ghostbusters 2 not 1984 and Ghostbusters) is happening after we’ve lost Harold Ramis.  But I can’t deny I am wildly excited to see Peter, Ray, Winston, Dana, and Annie Potts’ Janine Melnitz back in action!!!  I see Ghostbusters every time it comes back for a “classic series” showing at our local theatre (and I catch as many of the showings as I can!).  And I’m excited to see what sort of future ghosts and ghostbusting will have in the hands of Phoebe, Trevor, Callie, and Mr. Grooberson too.

You’ve piqued my interest Ghostbusters: Afterlife.  Sign me up.  Now, who am I gonna call about advance tickets…

The proton pack has been passed to a new generation. / Photo Credit –Ghostbusters: Afterlife

UPDATE:  After watching this first teaser trailer the other day I was clearly in a major Ghostbusters mood because I ended up rewatching Ghostbusters (1984) and Ghostbusters 2 (1989).  Then I even started watching the Ghostbusters video game from 2009 (which is set in 1991) on YouTube.  It served as sort of an unofficial sequel with Bill Murray, Dan Aykroyd, Ernie Hudson, and Harold Ramis (yay!) all reprising their roles by providing the voices for their characters in the game.  Dan Akyroyd and Harold Ramis are even credited with writing the non-gameplay parts of the game!  I’m thinking of starting to reread all the IDW Ghostbusters comics too…  So yeah this trailer, complicated emotional reactions or not, certainly hooked me.  What can I say?  Bustin’ makes me feel good.

One thought on “Ghostbusters: Afterlife – A Trailer, A Mixed Bag of Emotions…”