In October of 2012, Arrow launched on the CW.  It was a new DC show centered around Oliver Queen, the wealthy playboy-turned-costumed-vigilante know as Green Arrow.  It was an attempt to help fill the superhero void left on the CW when Smallville’s epic ten season run (2001-2011) came to an end.  While Oliver Queen appeared on Smallville, the producers of Arrow decided to start fresh, casting Stephen Amell in the title role as opposed to Justin Hartley who played him on Smallville.  But that was only the beginning.  Arrow would beget The Flash (2014-present), the short-lived Constantine (2014-2015), Supergirl (2015-present), Legends of Tomorrow (2016-present), and three web series; Vixen (2015-2016), Freedom Fighters: The Ray (2017-2018), and Deathstroke: Knights & Dragons.  This Arrowverse has become a huge hit with critics and fans alike…and I’ve watched none of it.  Why would I?  Do you have any idea how big a time commitment that is?!!?  And I’ve always been a Marvel guy anyway.

But now the Arrowverse has Batwoman and, because of that, everything’s changed.

I make no secret of the fact I’m no Batman fan.  He’s a bit of a one-note character to me and I’ve always found him overrated.  I do think you could make the case (or, rather, someone with a far more educated sense of the history of literature than I could probably make the case) that he may be the most emotionally stunted character in all of fiction.  Sure, there are Batman stories I enjoy and yes I do believe The Dark Knight is one of the greatest films of all time.  But I’ve never been a huge fan of the grumpy, dour, dark, edgy sort of superhero.  They’ve never been my scene.  I think Frank Miller’s The Dark Knight Returns is terribly disappointing in just about every way that matters.  And I’ve thought of eventually writing a piece on how my favorite Batman stories are when Dick Greyson is the one wearing the cape and cowl.  I love comic books but I’m just not a Batman guy.

Given this, I was completely unprepared when, in June of 2016, Detective Comics found a home on my pull list as one of the comics I most enjoyed.  I was reading and loving a freaking Batman comic??  What manner of sorcery was this??  It was a mind-blowing moment for me.

In an effort to become a more well-rounded comic fan I had decided to try a wide sampling of DC titles when their Rebirth event launched in 2016.  Maybe I could find a foothold in this world, you know?  I’ve lived in and loved the Marvel Universe for my entire life and I’d discovered how great IDW could be since my return to comic reading.  But while I’d read DC off and on through my youth and enjoyed (many of) the Superman and Batman shows and movies to cross my path, I never felt I could truly call myself a fan of the DC universe/characters in anyway. 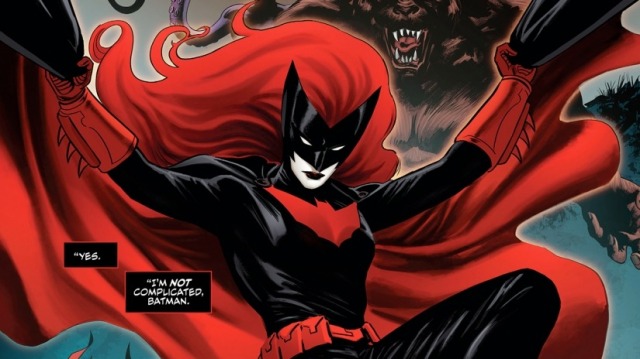 Batwoman would start to change all that. / Photo Credit – DC Comics

As I wrote earlier this year, it has been G. Willow Wilson’s consistently incredible run on Wonder Woman that finally brought me fully into the DC Universe.  She made it feel like home for me!  It was the mystical alchemy of this character being written by this author that lit the fire of a devoted, consuming love within me – a love that has led me to pick-up Kelly Sue DeConnick’s Aquaman and James Tynion IV’s Justice League Dark (both titles which, like Wonder Woman before them, have accomplished the incredible feat of displacing Marvel titles on my pull list).

But it was James Tynion IV’s Detective Comics that first sparked sincere passion and excitement within my comic-loving heart for a DC title.  And it was largely my meeting Kate Kane, the Batwoman, which did this.  Written as she was by Tynion, I was instantly intrigued by her character.  The more I read of her in Detective Comics (and in her own solo Batwoman title written by Marguerite Bennett) the more I loved her. 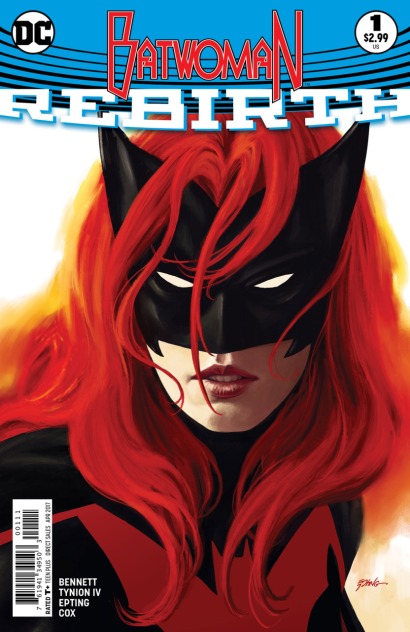 I couldn’t wait to read this too! / Photo Credit – DC Comics

In the Rebirth continuity (because, as of now, I haven’t read any of DC’s New 52 stories with Batwoman so I don’t know what carried over (and the New 52 was where she originated)) Kate Kane is the cousin of Bruce Wayne, the niece of his mother Martha.  Herself a wealthy socialite/heiress like her cousin, Kate chose to follow her father Jacob Kane in military service in an attempt to please him after her mother and twin sister were killed.  While at West Point her colonel learned she was lesbian and Kate chose to be dishonorably discharged rather than lie about who she was.

Kate then travelled around the world without a clear direction for a year (a story explored wonderfully as part of Bennett’s Batwoman title) before being inspired by Batman’s example to take up her own crusade against crime.  In a powerful nod to her Jewish identity, Kate dons the Hebrew colors of war in her Batwoman costume and utilizes both her military training and her father’s guidance as she takes to the streets of Gotham herself.

In Detective Comics #934 (their first Rebirth issue), Batman recruits Batwoman to lead a team of vigilantes he’s putting together to protect Gotham.  So yeah, I enjoyed Detective Comics in part because it wasn’t a Batman comic per se so much as a team book.  But Batwoman stole the show for me.  The way she carried herself, the way she wouldn’t take any of Batman’s shit, the way she made it clear they’d be operating as equals if she accepted his offer when everyone from his litany of Robins to Alfred to his Justice League buddies (all of whom he has plans to kill “just in case” (like, c’mon Batman, do you know what “friendship” means? (hint: it doesn’t mean preplanning how to kill someone))) have various degrees of discomfort disagreeing with him was just so BADASS.  Who looks at Batman and calls the shots?  Who looks at Batman and dictates the terms?  Who looks at Batman with zero deference or intimidation?  And whom does Batman actually listen to even though his whole thing is being a loner?  BATWOMAN THAT’S WHO.  BOOM.

Bruce reveals his identity to Kate and I LOVE how surprised he is by the fact that she already knows :). / Photo Credit – DC Comics

It wasn’t just that Kate Kane had the force of will to look Batman in the eye and tell him how things were going to go nor that he’d (begrudgingly) listen to her that made me fall in love with her though.  Rather, she often challenges Batman (again, begrudgingly) in the name of healthier behaviors.  She chastises him for shutting his team – his family – out.  She pushes him to share/open himself more and to see his team as full human beings.  She does her best to help him heal as he mourns some serious losses in this run.  She listens to his orders/suggestions when she thinks they will work and goes her own way when she believes they won’t, always explaining to Bruce why she acted as she did.  She pushes him to see his team as a team and not children he needs to watch over.  But she’s also aware of their limits and does her best not to put them needlessly in danger.

Don’t get me wrong; she has her own flaws and her own baggage.  What character could generate any sort of lasting interest, let alone relatability, if they didn’t?  But, flaws and all, Kate Kane is this independent, confident character who will stick to her guns and do things (more often then not successfully) her own way – this is especially remarkable in a Batman comic where the Bat is often seen as the end-all-be-all of human perfection.  Kate doesn’t see herself as better than Batman – as a vigilante or a human being – but she is confident enough to see herself as his equal.  As such she seeks to help him grow and transform.  Kate wants not just to protect Gotham but to make Bruce, in addition to the team he’s given her, better.  And she’s open to challenge and growth herself too. 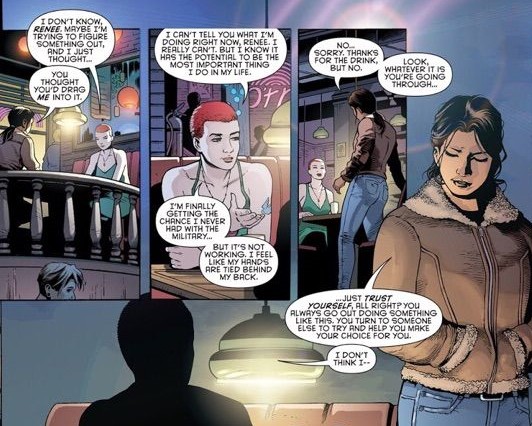 In the world of Batman – a world featuring an incredibly broken, to varying degrees, cast of characters on both sides – Batwoman is a remarkably healthy role model.  A (relatively) healthy role model!  In a Batman comic!  Aaaah!  Given how important diversity is to me in my comic characters and creatives, the fact that Batwoman is an out character who also takes her Jewish faith seriously also means a great deal.  In this way she’s not just an exciting and interesting character; she’s an important one too.  How could I not love this character?  With each issue I read of James Tynion IV’s Detective Comics and Marguerite Bennett’s Batwoman I wanted to know more about her.

I’ve been contemplating going back and reading all her New 52 adventures as well.  It’s an admittedly surprising move to consider getting so many Batman comics for someone who doesn’t really dig Batman.  But Batwoman may well be worth it.  Hmmm…

Hmm…she seems to think she is worth it.  See?  There’s that confidence thing I was talking about. / Photo Credit – DC Comics

Naturally then I was beyond excited when I heard Ruby Rose was cast to bring Batwoman to life in the Arrowverse!  Even though I’d avoided the Arrowverse for seven years as a) I’m not really a DC guy and b) it was an intimidating amount of episodes to jump in and catch-up on, I knew I’d be entering the Arrowverse for Batwoman.  She’s brilliant enough to break new ground in her honor!  In fact, given the show will premiere before Supergirl (perhaps the Arrowverse show I’ve been most interested in even though I’ve never committed for the reasons I just listed), I’ve decided to try and binge-watch all four seasons of Supergirl on Netflix so I’ll be ready for the Season Five premiere after the premiere of Batwoman on Sunday, 6 October.  (Why I’d do this to myself is still kind of unknown.  I do know I hate binge-watching TV…but I guess I also know I love Batwoman so it’ll probably be okay (probably…(only time will tell I guess)).) 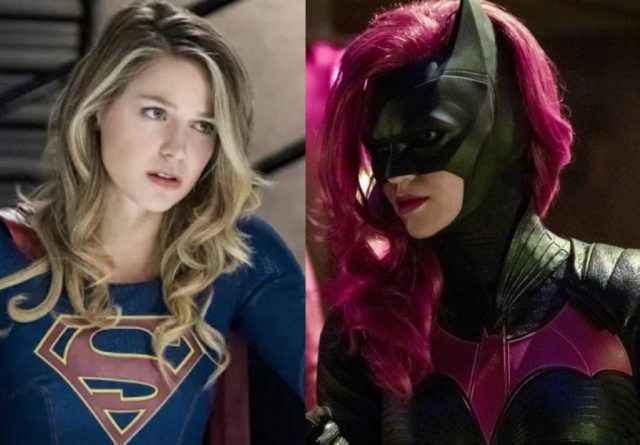 Supergirl looks incredulous at the thought of me pulling this binge-watching marathon off.  I can’t say I blame her… / Photo Credit – Supergirl and Batwoman

Given what I know of the Arrowverse from what I’ve seen of Supergirl so far (and The Flash as I’ve hit the very first crossover episode (but none of the multi-episode crossovers yet)), I think this will end up being one more thing I have to love about Batwoman.  I have adored what I’ve seen of Supergirl (I’m just about six episodes into Season Two as I write this) and I owe all of this watching to the fact that Batwoman is coming out.  And ultimately I’m excited for Batwoman because James Tynion IV and Marguerite Bennett showed me what an incredible character Kate Kane is.  I have no idea what Ruby Rose will be like in the roll nor how the showrunners will handle it.  I obviously haven’t gotten to the Elseworld crossover where they introduce her yet nor have I watched many trailers, wanting to savor the surprise later.  But my hopes are high and from what I’ve read about the show and what I’ve seen Ruby Rose in, I have no reason to temper my excitement.  I cannot wait for 6 October to arrive…even if I still have seventy episodes of Supergirl (and crossover episodes) left to watch.  But Batwoman’s worth it.  Any character who can make me not only read but excitedly look forward to and deeply enjoy a comic book starring Batman is something special.

11 thoughts on “Who Is Batwoman? My Entry Point Into the Arrowverse!”