I wasn’t planning on writing today.  It’s my birthday after all!  Why go out of my way to make work for myself on my birthday?  But then an idea for a post struck and, when a new idea is unfolding, writing isn’t work.  It’s fun!  So with that in mind, you know I love Doctor Who.  And I thought, what with it being my birthday and all, it might be kind of fun to reflect a little on what leads me to love certain characters or fictional worlds.  Out of all the stories – novels, comics, movies, or TV shows – I’ve consumed in my life, what makes one stay with me?  What makes me want to return to that world and visit those characters again and again and again?  What captures my heart and mind? 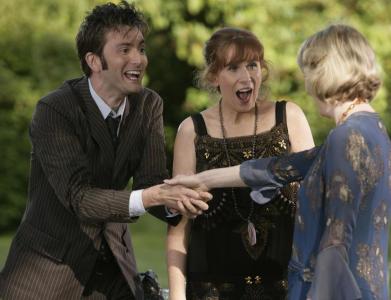 The Doctor and Donna meet Agatha Christie (!!!) in “The Unicorn and the Wasp.” / Photo Credit – Doctor Who

This idea was born from part of my Pre-Birthday celebration.  For clarification, birthdays are not something I’m a fan of.  I prefer to follow Grandma’s method of birthevents where the birthday is stretched out as long as possible.  Taking a cue from Dad then, any birthday should feature no less than a Pre-Birthday, Birthday, and Post-Birthday for appropriate levels of celebration and time as the center of attention :).  It’s three days minimum for your birthday people!  Anyway, my pre-birthday festivities included watching a couple of episodes of Doctor Who, specifically “The Doctor’s Daughter” (S4E6) and “The Unicorn and the Wasp” (S4E7).  (I watched the second episode with Mom and Kalie which always makes it more fun too!)  As I let the stirring emotional heart of “The Doctor’s Daughter” wash over me and reveled in the whimsical fun of “The Unicorn and the Wasp,” I kept thinking about how much I adore the Doctor as a character.  And I realized how easy it is to answer the above questions with the Doctor. 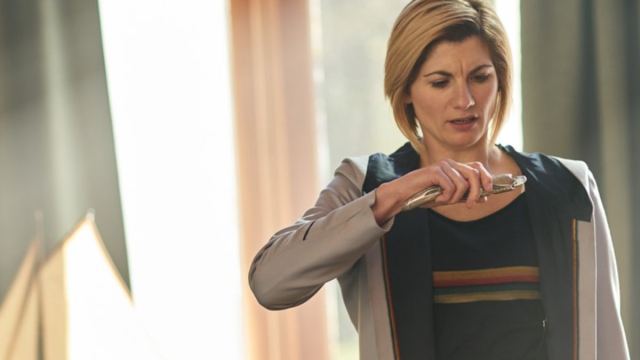 The Thirteenth Doctor checks some readings on her sonic screwdriver.  And yes, before you ask, I DO have one.  I got it on sale at a toy store after last Christmas!  It makes the sounds and everything!  You can ask Kalie, it’s awesome and she in no way finds it annoying when I play with it all the time XD. / Photo Credit – Doctor Who

Two facets of the Doctor’s character come immediately to mind when I think of why I love returning to this world so often and why they’ve captured my heart and mind – joy and nonviolence.  There is SO MUCH to love with the Doctor but those two are what top my list.

As a character, the Doctor is part of an alien race known as Time Lords.  This means the Doctor is essentially immortal (having the ability to regenerate into a new body when they’ve suffered a mortal injury or when their body is approaching death from old age) and has the technology to travel anywhere in space and time using a ship called the TARDIS (“Time And Relative Dimension In Space”).  When the Doctor entered her thirteenth regeneration, she was at least 2.000 years old.  Given 2,000+ years of life and the potential to travel anywhere in space and time, one ends up seeing A LOT.  Despite all the darkness and danger the Doctor has encountered in their travels, their first reaction to anything new is one of wonder, excitement, and joy.  With every new world, new race, new species, new piece of technology, or new crazy-looking-monster-thing the Doctor encounters, their first reaction is to say how brilliant and/or beautiful it is…no matter how overtly threatening it may appear to be.  In this way, Doctor Who is a constant celebration and affirmation of the beauty of life. 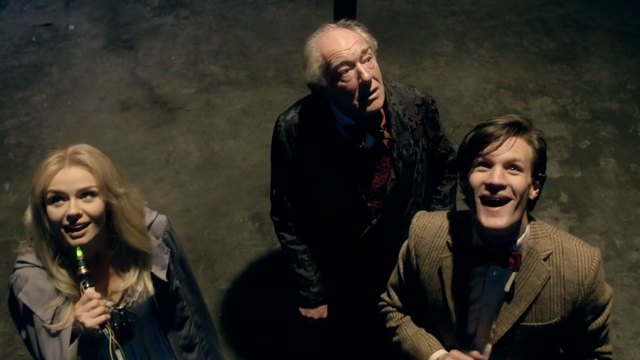 The Eleventh Doctor seeks to save the lives of 4,000 people trapped on a doomed ship to pull of a Christmas miracle! / Photo Credit – Doctor Who

I can’t help but share that sense of joyous excitement when I watch this show.  It’s contagious!  It’s impossible for me to watch the Doctor smile at, delight in, and compliment the never-ending variety in creation without it making me see the world around me in a brighter light too.  No matter the mood I’m in or the day I may be having, the Doctor’s smile will eventually spread to my face too :).  I just feel better when I watch this show.  There is so much sadness and anger and division and hate and willful/proud ignorance in our world.  It can feel like it’s crushing down on me, the burden near impossible to lift at times.  Yet every time I watch Doctor Who, I feel happier and inspired by the show’s end.  Everything seems possible.  That’s such a gift!

This joy of creation manifests in the Doctor’s commitment to protect all of its glorious diversity through nonviolent means.  The Doctor doesn’t carry any weapons.  The TARDIS is equipped with a universal translation matrix so it’s literally designed to aid its passengers in understanding and communication.  While it’s virtually indestructible, this feature’s for protection not combat as it has no lasers, missiles, or offensive capabilities of any kind.  In a beautiful bit of narrative symbolism too, a Time Lord’s biology means they have two hearts, a great way to illustrate the Doctor’s capacity for love. 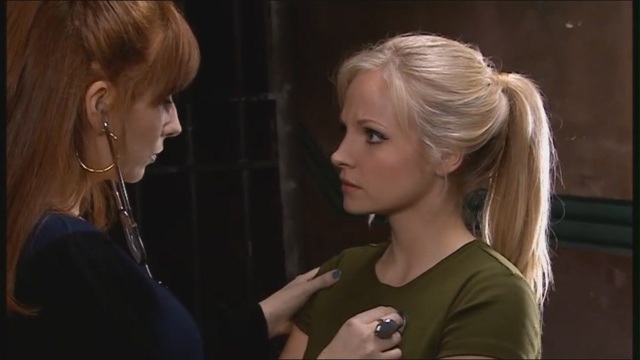 Donna checks to see if Jenny has two hearts like a natural-born Time Lord, only to find that she does! / Photo Credit – Doctor Who

In “The Doctor’s Daughter,” he tells his (created-near-instantly-from-a-stolen-bit-of-tissue) daughter Jenny, “Listen to me.  The killing…after a while, it infects you.  And once it does, you’re never rid of it.”  She protests, “But we don’t have a choice.”  The Doctor assures her with equal parts compassion and seriousness, “We always have a choice.”  In the same episode, Donna tells Jenny what she’s learned of her father in their travels together.  Donna says, “He saves planets, rescues civilizations, defeats terrible creatures.  And runs a lot.  Seriously, there’s an outrageous amount of running involved.”  But all that saving, rescuing, defeating, and running is done without a weapon in his hand or malice in his heart.  The Doctor saves the day by being the smartest person in the room and utilizing compassion, witty wordplay, and the power of true communion.

Looking back at my life, this idea of the nonviolent hero is something I’ve always been drawn too.  As a child, the fictional character that left the largest mark on my developing ethical sense was MacGyver.  I loved that show!  And what was most remarkable to me, especially in the entertainment culture of the late ‘80s and early ‘90s, was MacGyver’s refusal to use guns or to kill.  I remember, without being able to articulate the why in any sort of meaningful way, how deeply this resonated.  I remember looking at my toy guns differently after watching MacGyver had become a regular part of my life and putting them aside, more often than not, preferring to be a hero who wasn’t carrying one.  This is probably part of what has always drawn me to Spider-Man (a superhero who uses webbing and wit over guns or swords) and the Ghostbusters (who trapped and stored the entities they fought, never hurting (to our knowledge) or destroying them). 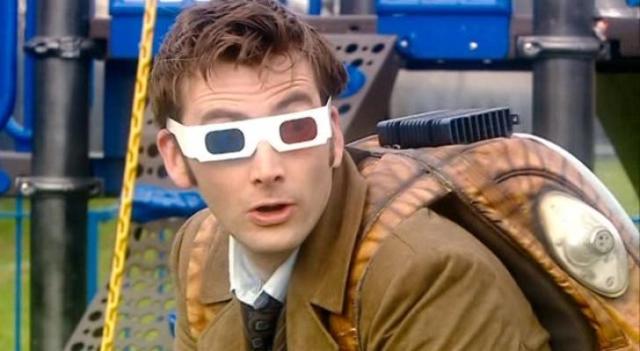 While the Doctor doesn’t use weapons, he certainly has all manner of wonderful toys to employ to save the day.  His 3-D glasses are always a favorite of mine :). / Photo Credit – Doctor Who

This is absolutely why Luke Skywalker throwing away his lightsaber in Return Of The Jedi is my all-time favorite scene in all of Star Wars and one of many reasons Return Of The Jedi is my all-time favorite Star Wars movie (I write more about all that here).  As I’ve often said, this subversion of the Myth of Redemptive Violence is also one of the reasons I love The Unbeatable Squirrel Girl as much as I do too (and I write more about that here).

The Doctor personifies this ethic so well, in word and deed.  Doctor Who is this unbelievably imaginative show – a show with action, adventure, intrigue, and plot twists unlike any I’ve ever seen before – built on a bedrock of nonviolence and care for all life.  What may be my favorite example of this on Doctor Who comes in a moving speech the Doctor delivers in “The Zygon Inversion” (S9E8).  As humans and Zygon alike consider setting off a weapon with genocidal consequences for the other species, the Doctor speaks about the horror of war and the power of forgiveness in a way only he can:

Ahh!  How incredible is that?!!?  I had tears in my eyes the first time I watched this episode and every viewing leaves me with chills.  I’m drawn to the Doctor’s world because it’s one of wild imagination – taking me to epic historical moments I’ve read about and alien worlds in far-flung futures I’d never be able to imagine.  But the Doctor as a character captures my heart and mind because of the message they embody in each episode, a message we would all do well to try and embody a little more ourselves.

So as I begin my thirty-seventh year around the sun, that’s what I hope to do.  I hope I can be a little more like the Doctor – a shining example of the type of hero I’ve been drawn too all my life, a hero who I’ve seen glimpses of in everyone from MacGyver to Luke Skywalker.  And really, isn’t that the point of heroes anyway?  We’re supposed to want to be like them!  They’re supposed to inspire us!  They’re supposed to teach us how to be better and what true victory really looks like. 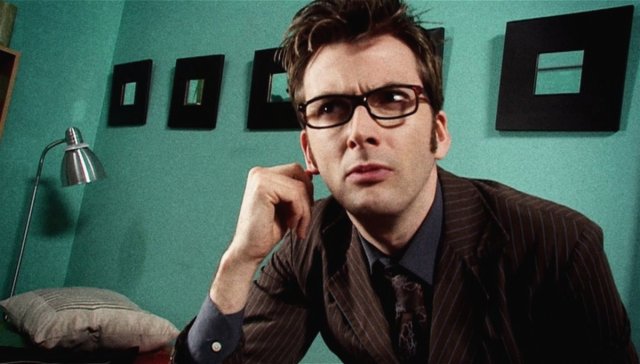 A truly great hero teaches us to see things differently when we look at the world too. / Photo Credit – Doctor Who

The Doctor does this, episode in and episode out with methods and a message I support.  That’s something that’s all too rare in the fiction I consume too, the hero who I can consistently cheer on without wading through any sense of cognitive dissonance or moral ambiguity (Squirrel Girl, of course, being another rare example).  I don’t just like what the Doctor does, but rather, they are beliefs I share and ones I try to model in my own life too, with varying degrees of success.  As she says, officiating the wedding of Yaz’s grandmother Umbreen in “Demons of the Punjab” (S11E6), “Something I believe in my faith, love, in all its forms, is the most powerful weapon we have.  Because love is a form of hope, and like hope, love abides in the face of everything.”  Amen Doctor, amen.

Whelp, with this reflecting now done, I’m off to celebrate the “literal birthday” part of my birthevent.  This will include a little more time with Doctor Who and lots of time with loved ones.  I hope your day’s a great one too and, if you need an excuse to relax, goof off, and practice some self-care and indulge yourself, feel free to use my birthday!  I’m happy to help provide you a reason to treat yourself which is great for you AND it’s a gift for me as I’ve always kind of thought my birthday should be an international holiday anyway and you taking today off just nudges me closer to that goal ;).

“All you need is love / Love is all you need” is another great Beatles tune to think of on the ol’ birthday AND it’s a powerful truth the Doctor always does her best to remind us of. / Photo Credit – Doctor Who