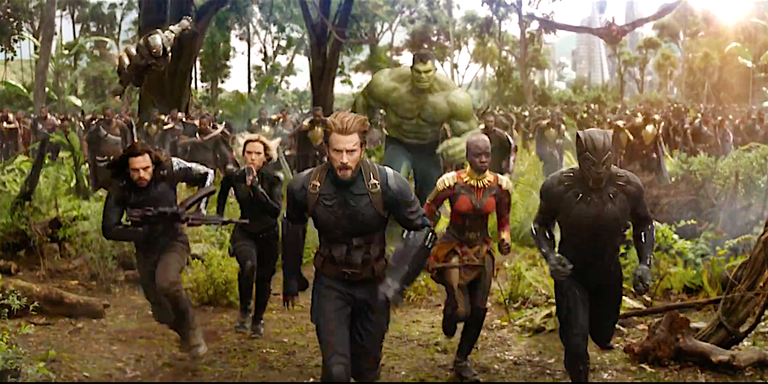 Well, The Last Jedi FINALLY comes out today.  So let’s discuss what’s on everyone’s mind…the Avengers: Infinity War trailer!  Woo!  A few weeks ago we got our very first look at the massive MCU crossover that’s been (depending on how you look at it) ten years (going from Iron Man) or six years in the making (going from The Avengers).  The Avengers!  The Guardians of the Galaxy!  The nation of Wakanda!  Everyone’s ready to go to war with the mad titan Thanos as he seeks the transcendental power of God.  YIKES.  With the trailer in mind, I sat down to re-read Jim Starlin and Ron Lim’s original Infinity War series from 1992 the other night, wondering what light it could shed on the impending cinematic epic. 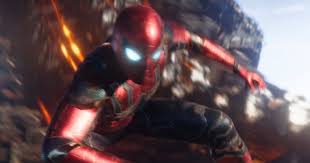 Now I know what you’re thinking and, yes, Avengers: Infinity War seems to be far more closely related to the Infinity Gauntlet storyline from 1991 (back in the days when Infinity Stones were still called Infinity Gems…ahh, simpler times).  But I already wrote about Infinity Gauntlet (and the anxiety it caused me as a kid) and I had no real desire to repeat myself.  Instead I figured I’d look at the trailer in conjunction with its namesake.  While I doubt the comic will have anything to do with what the Avengers and the Guardians of the Galaxy will be facing when Thanos rolls into town on 4 May 2018, it did illustrate what’s been casting a shadow on my excitement for the mother-of-all tentpole films.

Before we go any further, let’s take a second to watch the trailer again huh?  I think I watched it seven or eight times straight on my lunch break the day it came out but there’s always time for another viewing! 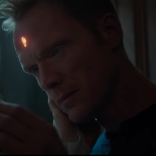 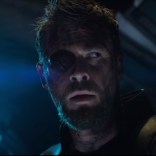 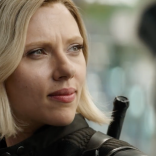 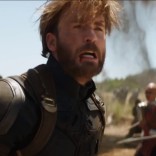 In 2012, The Avengers brought all these characters from independent films together to battle the Chitauri and showed the world the true potential of an interconnected cinematic universe.  Now, in 2018, Avengers: Infinity War is aiming to be just as groundbreaking on a far larger scale.  Conceivably we could be seeing Iron Man, the Hulk, Black Widow, War Machine, Thor, Loki, Hawkeye, the Winter Soldier, Falcon, Star Lord, Gamora, Drax, Rocket, Groot, Mantis, Nebula, Scarlet Witch, Vision, Ant Man, Wasp, Dr. Strange, Wong, our friendly neighborhood Spider-Man, Black Panther, and the Dora Milaje coming together to battle the Mad Titan.  Did I miss anyone?!?  I’m probably missing someone…  Regardless, that’s at least twenty-five superheroes suiting up for battle in one film.

The mystics and the scientists come together! / Photo Credit – Avengers: Infinity War

Do you know my very first thought when I saw this trailer??  This looks too crowded.  Now hold on.  I’m not trying to rain on anyone’s parade here.  I’m sincerely excited for this film.  How could I not be?!?  But, if I’m being completely honest (and why would I lie to you (or myself)? (although why I would lie to myself seems a far more existential question than I should pose here (at least right now, on The Last Jedi day))), as of this moment I’m far more excited to see Black Panther in February than I am to see Avengers: Infinity War.  Sure, part of it is how I’ve fallen in love with the character under Ta-Nehisi Coates’ stewardship and part of it is my excitement to see how the world of Wakanda translates to the big screen.  But the bigger issue behind it all is Avengers: Infinity War is going to be very, very BIG.  And that makes it tricky to pull off without becoming a convoluted mess.

Think for a moment of Sam Raimi’s Spider-Man 3.  Remember that?  Hot on the heels of X-Men in 2000, Sam Raimi continued to usher in the modern age of superhero cinema with Spider-Man in 2002.  Spidey was in his suit!  It looked just like the comics!  (Well, the Green Goblin looked a bit like a Power Rangers villain but he was played by the brilliant Willem Dafoe, dripping with menace, so we can forgive that.)  Then Raimi and company followed that incredible film with Spider-Man 2 – easily one of the best superhero films of all time.  Even today I’d rank it as one of my favorites!  Spider-Man 2 just got what it means to be a superhero movie…uh, and then came Spider-Man 3.

Now I liked it!  It wasn’t my favorite of the series, but I liked it.  Regardless of how you feel about Spider-Man 3, one of it’s universally recognized faults was that it had too much going on.  With Spidey battling Sandman (for Raimi), Venom (for the studio), and Harry assuming his father’s mantle as a new Goblin (for the narrative closure) it was just too busy.  For a variety of reasons there was never a Spider-Man 4 in that series but Sony tried again with The Amazing Spider-Man…and made the exact same mistake in The Amazing Spider-Man 2.  Peter was dealing with graduation, Gwen, Electro, the Rhino, uh…something with Harry (I don’t remember), and all the other stuff Sony forced in there with Oscorp to try and jump start a Spidey-centric cinematic universe.  The Amazing Spider-Man 2 was such a hot mess it lead Sony into cutting a deal with Marvel Studios to bring Spider-Man into the MCU.

See!  I knew there was some Harry (I guess Goblin) action going on in this one. / Photo Credit – The Amazing Spider-Man 2

It’s very, very hard for me to watch this Avengers: Infinity War trailer and not see the shadow of these problems rising again.  I grant, if anyone can pull this off it’s probably the Russo brothers.  I thought Captain America: Civil War was a thoughtful, surprisingly dark (at least for the MCU (we’re not talking Netflix here)) film with a healthy amount of psychological complexity.  It managed to be all that with a not insignificant sized cast too.  However, what’s playing out (or appearing to play out) in Avengers: Infinity War is still a lot to try and manage.  That brings us back to Jim Starlin and Ron Lim’s Infinity War comic.

The end of their Infinity Gauntlet series saw Thanos stripped of his godlike power and assuming the life of a farmer on a quiet world.  Infinity War begins with Thanos, still getting his farm-farm action on, picking up disturbing energy signals out in space.  These signals appear similar to the Infinity Gems so, not wanting to see his reality destroyed, he ventures out to investigate.  He learns the Magus (the dark side of Adam Warlock’s personality, cast out by Warlock (along with his goodness) when he briefly held the Gauntlet to ensure he used the godlike power without being corrupted) is the one conjuring this near-omnipotent power. 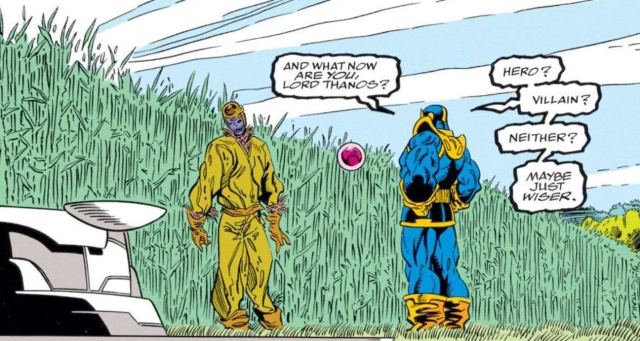 Farmer Thanos gets all existential and whatnot. / Photo Credit – Marvel Comics

Thanos joins forces with Adam Warlock and the Infinity Watch (Gamora, Pip, Moondragon, and Drax) to track down the Magus and put a stop to his quest for omnipotence.  Galactus is journeying through space with the Silver Surfer, his new herald Nova, and Dr, Strange as they too seek the origin of these disturbing power signatures.  Back on earth, all of the other superheroes gather at Four Freedom’s Plaza to discuss what’s going on and formulate a plan of attack.  A large contingent of heroes are teleported to the Magus to try and defeat him while the others remain on earth and battle their doppelgangers (evil twins of all the superheroes (who were criminally underused in this story (quite disappointing ten year old me (as they were a MAJOR reason I wanted to read this story (and I kept buying the next issue waiting for real exciting fights with the doppelgangers that never came))))) the Magus sent to keep them busy. 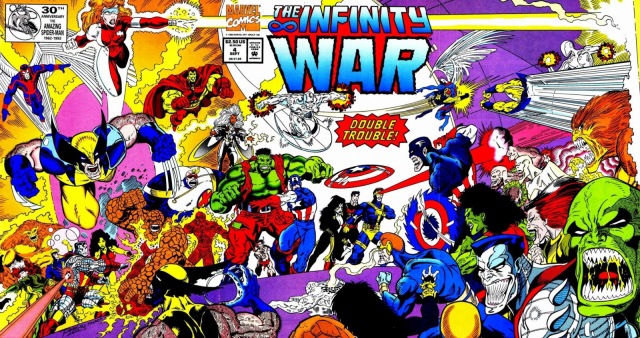 DO YOU SEE HOW COOL THIS LOOKS?!?  Yeah, I never really got a big (or significant) battle like this. / Photo Credit – Marvel Comics

Comic fans always seem to want a comic book movie just like these big massive crossover comic books however, I don’t think anyone really does.  The overwhelming majority of the characters in these stories are only filler for big splash page crowd scenes or fight scenes.  There is no development whatsoever for most of the characters in the story.  They are completely superfluous to the narrative.  It’s just cool because we get to see them all doing nothing but standing around listening to battle plans and occasional punching stuff together.  I’d argue a movie like this, over-crowded with characters we’ve come to love but with no potential for emotional development or a real narrative arc, would feel like a cheat.  And rightly so!

Counting as I re-read The Infinity War miniseries, I found it featured eighty-three different superheroes.  Of those eighty-three, fifty-one have a speaking roll.  The bulk of the characters who speak though just have one line of dialogue or several completely nonessential ones.  Of the eighty-three characters in this crossover event only seventeen have fully developed arcs and are honestly/authentically relevant to the story.  Just SEVENTEEN!!!

Who is lucky enough to get to talk?!? / Photo Credit – Marvel Comics

If this is how Avengers: Infinity War plays out I’m going to be upset.  I think a lot of us will be.  One of the hallmarks of the Marvel Cinematic Universe is their rich, layered, witty, whimsical characters.  Think of how we’ve seen them grow!  Tony Stark has gone from this egotistical, hubristic one-man-show to a broken, jittery, humbled (sort of) man.  Steve Rogers has fought to hold on to his moral compass in the face of the modern world where it feels increasingly anachronistic…even when doing so put him at odds with the country and the people he protects.  Hell, the main reason Guardians Of The Galaxy Vol. 2 is my favorite film of the MCU is because James Gunn was bold enough to put character development ahead of just making the villain bigger in the sequel.  There’s nothing like the emotional growth and layers James Gunn gives his characters in Guardians Of The Galaxy and Guardians Of The Galaxy Vol. 2 anywhere else in the Marvel Cinematic Universe.  That’s why they’re my two favorite MCU films!

I’m very scared all of this development will be sacrificed in the name of everyone punching Thanos.  This trailer did nothing to assuage my fear.  I grant it’s just the first trailer.  I grant a trailer’s job is to show us exciting scenes to get us pumped up (and save the depth for the film).  And I grant that the Russo brothers gave us magnificent films in Captain America: Winter Soldier and Captain America: Civil War.  But I just can’t imagine how ANY film could do justice to at least twenty-five characters in two to three hours.  I don’t want a movie that’s just a bunch of fight scenes with ever-increasing destruction.  I want to see these characters I love continue to grow, in rich and intimate ways.  This doesn’t mean I’m not excited!  Nor does it mean I won’t be there opening night!  I can’t wait to see this film.  I’m just trying to work through a little anxiety here.  Sheesh…I’m going to be obsessing over this for the next five months.  Gah!  I almost feel like there’s some other movie I should be obsessing over too but, for the life of me, I can’t put my finger on it right now.  Hmm. 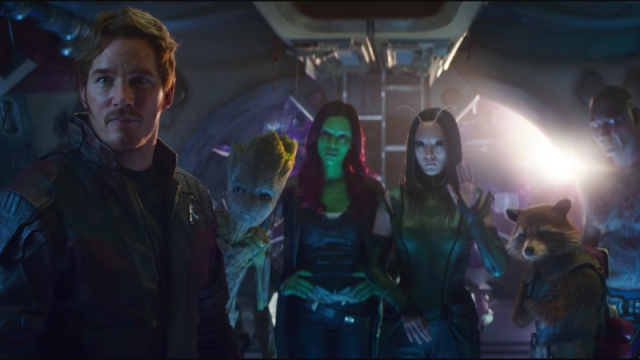 Do we want to talk about Peter Quill’s far more prominent mustache for a moment?  No?  Okay, coolio. / Photo Credit – Avengers: Infinity War

29 thoughts on “Avengers: Infinity War – A Trailer, A Comic”