Yes, it’s the first Saturday in May and that means FREE COMIC BOOK DAY! This is the sixteenth year this event’s been a part of our pop culture experience.  Personally, this is only the second time I’ve participated as someone picking up free comics, having just come back to reading them recently.  This year I waited in line (in my Star Lord garb from the movie on Thursday night) ready to take home my free comic and celebrate my favorite independent book store/comic shop – Books Galore.  On the costume note, special thanks to Green Onion who pointed out to me on Twitter Thursday that my Star Lord costume was missing a Walkman!  How did I let that slide by?!?  Thankfully I had time to go home after work to get my old Walkman before the movie so I was good to go on Thursday night and this morning.  Thanks man!

As I’ve written before, Books Galore and I go waaaaay back.  When I began my comic collecting journey as a kid, it was home base.  And, when I returned to the scene a few years ago, walking back through Books Galore’s front door felt like coming home.  The store is filled with all manner of comics, gaming items, collectibles, and new and used books – stacked in a way that takes advantage of every ounce of space.  The place is filled with floor-to-ceiling shelves lining the walls and creating aisles and angles through each floor.  It’s the type of store where you can go in, focused, and get your file and get out in a few minutes (well, more when you count fun banter about comic books with the people behind the counter) OR the place where you can disappear inside for hours, slowly exploring all the rooms on all three floors finding all manner of surprises within.  The whole place smells like books too :). 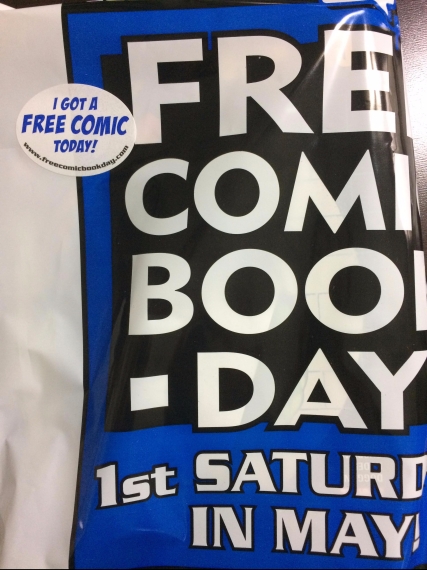 Books Galore does Free Comic Book Day right.  Now, admittedly, it was raining this year and unseasonably cold so some of their outside festivities had to be cancelled.  They had planned to have live music and an “instrument petting zoo” as they’ve always had in the past (the coolest thing in the world where kids are allowed to just sit down and play around with real instruments – it’s brilliant!).  But they still had donuts, face painting, a bunch of comics on super sale, storewide discounts on all sorts of merchandise, pictures of everyone who came, and the place was filled with people working who were as excited and nerdy/awesome as those of us waiting in line to go in.  I got there a few minutes after 10:00 (when the store opened) and the line, despite the weather, was already around the building!

Every year they offer a free comic book to anyone who comes.  You get two if you’re a club member and a third should you decide to come in costume (another reason I happily put my Star Lord garb back on (although, to be fair, both the t-shirt (which Kalie surprised me with! (thus leading to my needing the rest of the costume for opening night)) and the jacket are super comfortable (and look pretty good on if I do say so myself) so they’ll become regular parts of my wardrobe)).  Best of all, if you bring a non-perishable food item you get another comic book.  They take all the food donated and give it to local food banks so it becomes not just a day about celebrating comic books and nerdiness but also a day about giving a little something back to the community to help those who need it.

We all have to try our best to help out…just like Baby Groot! / Photo Credit – Guardians Of The Galaxy Vol. 2

Ready to hear what I found?!? 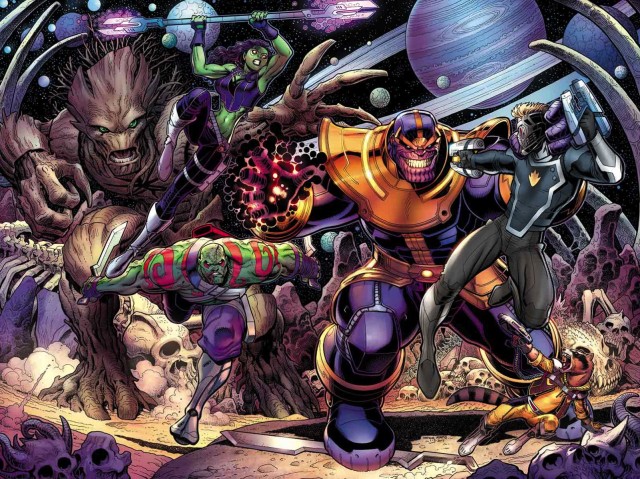 I started with Bendis’s finale, to get a sense of where the Guardians were before the headed back out into space.  To the issue’s credit, I was a little emotional at the final scenes, even though I’d never read the series before!  I felt the weight of all the stories I hadn’t read but, more than that, I felt the fun Brian Michael Bendis’s has had writing these characters for the last five years.  As a lifelong fan of the Fantastic Four, it was great to see Ben Grimm in a new story and I liked how they handled Kitty Pryde, Flash Thompson, and Angela as well.  Of course, meeting my film cast in a comic book for the first time was the biggest thing.  This was the very first Guardians Of The Galaxy comic I’ve read cover to cover.  It was a little unsettling, making the backward screen-to-page jump, but I still had a lot of fun seeing how these characters live in a different medium.  I think I can see (as samradly suggested in the comments on my last post) giving Bendis’s run some library love.  I’m not ready to commit yet…but I think I can put my toe a bit further into this pool of ideas. 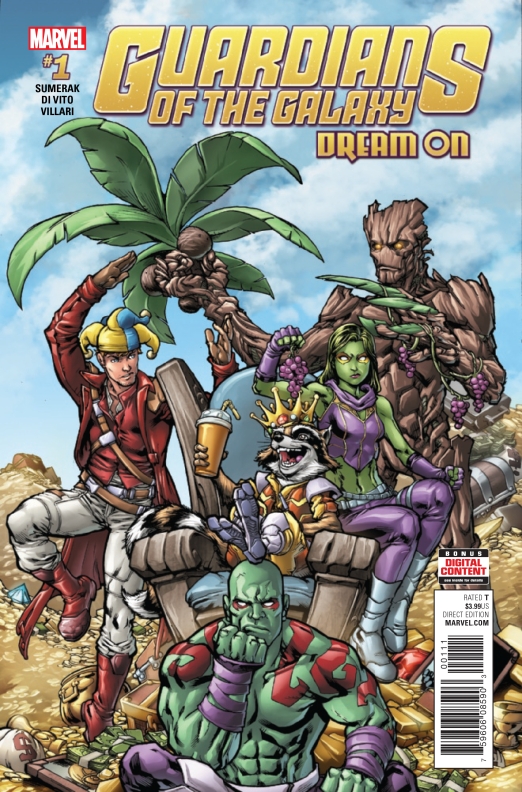 From there I moved on to Guardians Of The Galaxy: Dream On by Marc Sumerah and Andrea Di Vito.  This was a one shot story which was nice!  With Guardians Of The Galaxy Vol. 2 in theatres now everyone (myself included) is looking for more Guardians fun.  Here they have to deal with a bounty hunter out to collect them.  There were trippy dream sequences, great fight scenes, and some decent dialogue.  It also ended with a bonus issue of 1990’s Guardians Of The Galaxy #1 by Jim Valentino and Steve Montano.  I’ve said before, the 90’s Guardians didn’t grab my attention then and they really aren’t my thing now.  But it was fun to get a little unexpected flashback.  The main story, while fun, still didn’t grab me like the movie did.  I started to wonder if I’m chasing something I can’t find.  Maybe I do just have to enjoy the films.  If that’s the case, it’s not the end of the world right?

Anyway, I wasn’t done with my haul yet so it was time for Guardians Of The Galaxy: Mother Entropy.  Here we find the Guardians on Knowhere, unable to leave due to ever-growing debts.  They take a job from the Knowhere police, transport a priest and his religious artifact into Ravolan space, and their ship will be released from impound and their debts expunged.  However, this is the start of a miniseries so I don’t know how it  ends.  Also, I doubt I’ll pick up the next issue.  The characters sounded (at times anyway) like their film versions but the narrative didn’t grab me.  And it still wasn’t the right feel I was looking for, despite Starlin being the man who first created Gamora and Drax.  Here’s the thing – I don’t think comic books NEED to mirror their film versions.  It’s better to let artists create as they want in each medium.  Still, for me, it’s been hard to sift through the comic narratives seeking what I fell in love with in the film.  Does that make sense?  Oh!  Do you know what I just realized?!  Part of the problem is the music.  The music is such a central part of the films and reading is, naturally, a different experience. 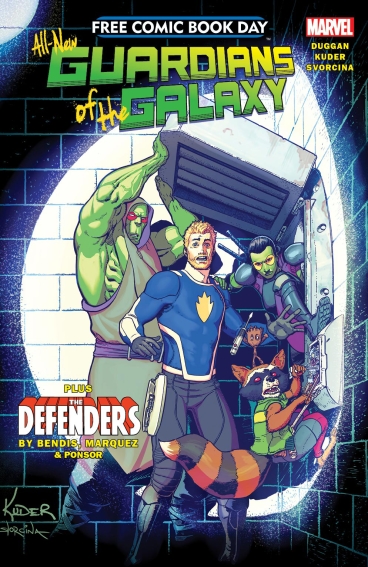 Annnnnnd that brought me to the next wave, the current adventure, that will carry the Guardians of the Galaxy on into the foreseeable future – Gerry Duggan and Aaron Kuder’s Free Comic Book Day preview and All-New Guardians Of The Galaxy #1.  The preview was good!  As though Duggan was ready for the issue I just realized I was having in the last paragraph, he incorporated a little classic rock into the narrative.  Yay!  And there was an obvious attempt (having Peter, Gamora, Drax, Rocket, and Groot together) to capture the feel of the films.  However, for me at least, that’s obviously not necessarily a bad thing.  There were enough new twists to be engaging and surprising too (Drax is a pacifist?!?  Groot can’t regrow?!?  Gamora’s hiding something big?!?).

Following the preview with All-New Guardians Of The Galaxy #1 gave me…a surprisingly good feeling.  Maybe because it was the start of something?  Maybe it was the overall feel of the narrative?  All I know is I laughed out loud several times while I was reading it on the couch; the characters are familiar but, in addition to being funny, there seem to be some new emotional developments waiting to be explored; and there were some more musical references too.  Huzzah!  The experience of space seemed pretty wild too, as Duggan and Kuder have been promising in their interviews.  I’m not adding it to the pull list yet, but I’ll happily read a few more issues to see where this goes.  It was a lot of the fun I was hoping for!  There was a sense of the films sensibility but also a story that wasn’t like anything I’d seen in the movies.  So that’s nice.  There’s also clearly a lot to explore from this first issue – both in the cosmic side of the Marvel Universe and within the emotional landscape of these characters.

I know I should really look into Abnett and Lanning’s Guardians Of The Galaxy run from 2008 (as liverpoolmonkey kindly directed me towards in a comment on my last post).  This is where the modern understanding of the Guardians was born and where James Gunn began to weave his vision of this team.  I thought about it as I drove home from the movie Thursday night too but…I’m not ready (yet).  I still want to have the Guardians of the Galaxy in Gunn’s movies without seeing their genesis on the page.  Does that make sense?  Then I’m not lost in the comic-to-movie analysis.  I’m excited to read them…sooner or later.  As to Bendis’s run, I still feel like there’s too much there for me to dive into right now.  Maybe someday.  It could be a nice summer vacation read perhaps.  Duggan and Kuder have me intrigued, but I’m not fully committing yet.  Again, this all may be chasing the wind.  I might just end up loving Peter Quill, Gamora, Rocket, Drax, and Groot in their cinematic adventures.  And I’m okay with that too.  Only time will tell.

But right now?  Now I’m off to the movie theatre for a matinee screening of Guardians Of The Galaxy Vol. 2!  It will help me (*cough* ridiculous justification for a second screening *cough*) coordinate my thoughts and feelings so I can start to really think about what I want to write about the film.  Like I did with Logan, I’m planning on waiting a few weeks to write a piece on Guardians Of The Galaxy Vol. 2.  I want to figure out what the movie means to me and what I really want to say before I begin to write anything.  (Also, I want to let people have a chance to see it before I write something that may spoil any part of this wonderful movie for someone.  I abhor spoilers!)  This second viewing will also give me the Guardians of the Galaxy I’m looking for!  These last few hours on the couch reading and writing have been a fun little whirlwind tour through some of the comic versions of the Guardians of the Galaxy…but now I’m ready to go see the ones who have already stolen my heart.

Enjoy your weekend.  Maybe you can treat yourself to a Guardians Of The Galaxy Vol. 2 screening yourself?!  You should also absolutely go celebrate FREE COMIC BOOK DAY!!!  And, in the process, you get to celebrate your local comic shops/independent book sellers too.  Everyone wins!  Yay!

I’ll see you at the movies! / Photo Credit – Guardians Of The Galaxy Vol. 2

7 thoughts on “Free Comic Book Day and My Guardians Of The Galaxy Sampler!”