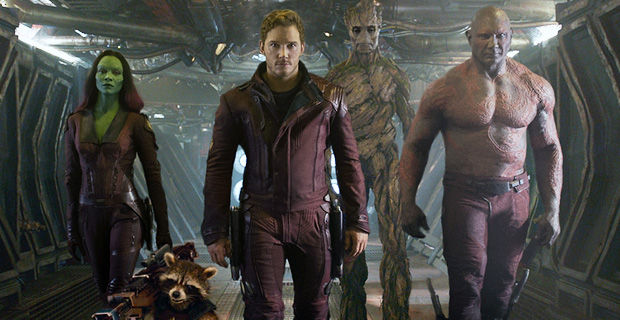 Photo Credit – Guardians of the Galaxy

When I walked into the movie theatre in August of 2014 I knew nothing of the Guardians of the Galaxy.  When I walked out of the movie theatre, I was in LOVE with Guardians of the Galaxy!  It’s one of those films I never tire of watching.  No matter how many times I see it, I always laugh.  It’s a great film to put on when I’m in a bit of a funk as it’s always sure to bring a better mood with it.  And, of course, it’s a movie that just makes me want to dance.  Is there any better feeling in the world??  Everything works so perfectly in the film.  I’ve always enjoyed the trope of a lovable band of losers coming together to become something more.  We meet these awkward misfits who don’t fit in anywhere else…except with each other.  Then we watch this group of a-holes (who aren’t 100% dicks) rise to make the increasingly altruistic choices again and again, becoming a family along the way.  Yes, it’s a common storyline but James Gunn’s vision – presented with such a perfect cast – makes it all feel special and new. 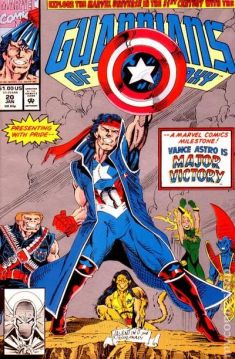 It was also fun to go to a Marvel Cinematic Universe movie where I had no experience with the characters too.  When I was a kid, the Guardians of the Galaxy weren’t really a thing.  Consulting my 1992 Marvel trading cards, I see the team was around and it consisted of Major Victory, Starhawk, Charlie-27, Martinex, Nikki, and Talon.  Uh…huh?  As a kid this card always kinda bothered me because I loved comic books but I had NO IDEA who these people were.  All I knew was it looked mike Major Victory was a future rip-off of Captain America.  So I got to meet Peter Quill, Gamora, Rocket Raccoon, Groot, and Drax for the first time with most of America!  I feel in love with these characters and this movie so much that, when I returned to comic collecting in 2015, the Guardians of the Galaxy were high on my list of comics to consider for my pull list (despite the large number of solo titles connected to the team book which threatened the potential for regular, needless crossovers).  However…nothing ever felt right. 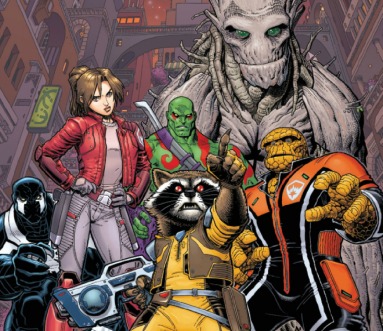 When I returned to comic collecting the team featured Kitty Pryde as their Star Lord and leader.  Apparently she had a relationship with Peter Quill and, even after their marriage ended, she stayed on to lead the team.  What?!?  Rocket, Groot, and Drax where there and the team also had Venom (and by “Venom” I mean Flash Thompson (who had served in Iraq and lost his legs (and also got the symbiote at some point?!? (and took to the stars to be a good guy (and had joined up with the Guardians of the Galaxy along the way (and SO MANY THINGS HAPPENED after I stopped reading comics)))))) and Ben Grimm (who, joined up since the Fantastic Four had dissolved to spite Fox Studios since they held the film rights for…some solid story reason).  Now, don’t get me wrong.  I’m sure there were some exciting stories to be had there!  But, as someone returning to the world of comics after a seventeen year hiatus, there seemed like an inordinate amount of back story to catch-up on there so, a little intimidated, I steered clear. 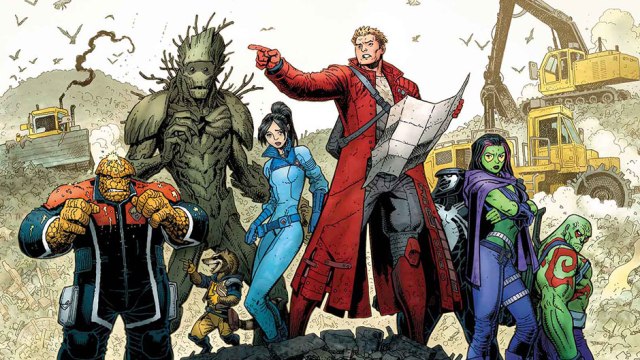 Looking forward from that point came Civil War II and the team being split up and “Grounded.”  Again, I’m sure these stories were exciting but I wasn’t looking for the Guardians of the Galaxy…on earth.  So I continued to steer clear of those titles.  Looking backward from that point I saw a lot of crossing over with the X-Men and what appeared to be a semi-convoluted story in “The Black Vortex.”  I wasn’t read nor willing to jump back into the wild mess that seemed to characterize the X-Men in the latter part of my non-comic collecting years.  In what appeared to be another move by Marvel to marginalize a title that Marvel Studios didn’t own the film rights too, it seemed that the X-Men were facing one extinction event after another and much of the core social justice message (not to mention family nature) of the team I remembered had been lost.  So, while I know Brian Michael Bendis has been writing the Guardians of the Galaxy comics for around five years and I know those stories come with their fair share of critical and fan acclaim, none of them seemed to fit what I was looking for. 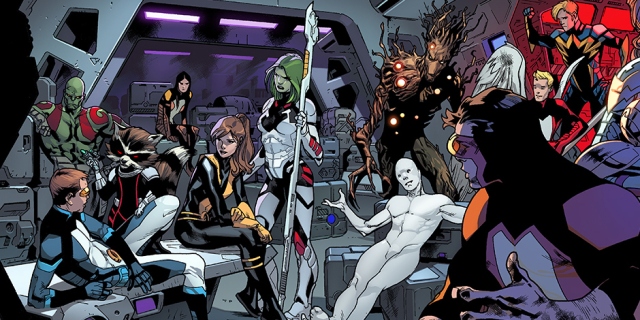 The Guardians of the Galaxy and the X-Men and…um…other people I guess? / Photo Credit – Marvel Comics 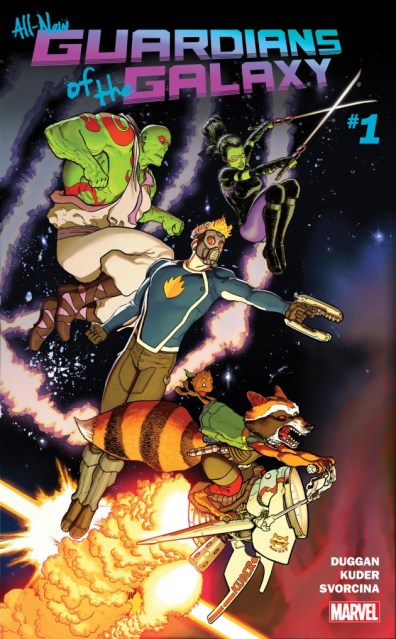 The new Guardians title features the cast of characters I know from the film and it’s taking them back into deep space to do their thing.  Talking of the new series, Duggan made it clear that, “Readers should expect an outer space that makes no sense to us Earth dwellers.”  I dig that!  If I’m reading a space title, I want the Guardians of the Galaxy bouncing around the cosmos and encountering the weird, wild, and wonderful.  So everything sounds good right?  BUT (given the popularity of these characters) Marvel’s decided to make their new Guardians of the Galaxy title BI-MONTHLY.  Uuuuuugggghhhh.  That means I’m paying $8 a month for ONE story.  Grrr.  DC had to make the bi-monthly thing trendy with Rebirth but at least they had the decency to pretend it was cheaper (because, you know, a monthly title is $3.99 but their bi-monthly ones are $2.99 so you think you’re saving money when really you’re spending $6 a month for that one title).  I have a limited comic budget and X-Men: Gold is trying to take that bi-monthly spot.  I don’t have the money to accommodate two bi-monthly series.  So what do I do?

Do I buy them both for a while and see what grabs me more?  Or, and this may be the more wild idea, do I just not even attempt to read Guardians of the Galaxy.  Okay, stay with me for a second.  For me, meeting and falling in love with the Guardians of the Galaxy as I did, they are and will forever be James Gunn’s vision.  That’s the definitive version for me.  With that being the case, can any comic story give me what I’m looking for?  I WANT to enjoy the Guardians of the Galaxy every month!  I’d like to fill some comic box space with many more adventures of this team I’ve come to know and love.  But am I chasing something I can’t find?  Do I just have to be patient?  Should I just accept the Guardians of the Galaxy will be a (hopefully…most-likely) amazing trilogy of films that I have to wait for in between and then relive on DVD?  Should I just say “Enough is enough” and appreciate what James Gunn and co. has given (and will continue to give) me? 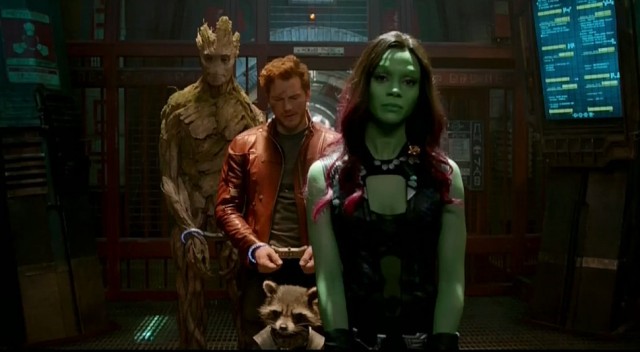 I’m hooked on THIS feeling…specifically.  I LOVE IT. / Photo Credit – Guardians of the Galaxy

I’m sure this rational has to be the exact opposite of what Marvel is hoping for.  But…maybe it’s what’s best for me.  I don’t know.  I want to like the Guardians of the Galaxy comic book!  I want to enjoy new adventures with Peter Quill, Gamora, Rocket, Groot, and Drax every month (or…ugh…twice a month).  But I also don’t want to waste money on something I feel I should read when it’s not what I’m looking for.  I feel a long, tangential ramble starting so I think I’m going to cut this off here.  I’ll ponder this pressing concern (while saying a few extra prayers of thanksgiving that I can devote mental energy to a First World Problem such as this) as I let my excitement mount for Guardians of the Galaxy Vol. 2.  Regardless of what I decide to do at the comic shop tomorrow, I know where I’ll be Thursday night baby!!!  (And, hopefully, a time or two more this weekend!)  I also know what I’ll be wearing.  After the fun I had with Logan and the fact that Kalie sweetly surprised me with the t-shirt Peter Quill wears in Guardians of the Galaxy Vol. 2 the other day, I’ve assembled a Star Lord outfit for the movie.  I also spent a lot of time trimming the beard to match his.  It’s all about the little details you know?  Also…I guess I’m a guy who dresses up for movies now?!  When did this happen??  At least that gives me something else to think about other than comic buying uncertainty! 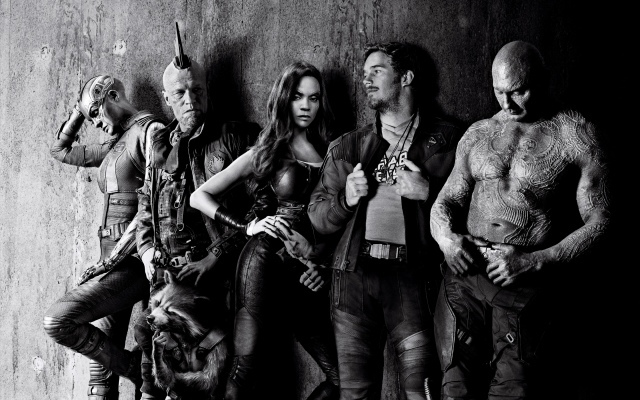 Kalie ALSO surprised me with another great t-shirt that looks like this.  Woo!  Let’s bring on the sequel baby!!!  I can’t wait!!! / Photo Credit – Guardians of the Galaxy Vol. 2

19 thoughts on “How Much Guardians Of The Galaxy Can I Get?!?”