I’ve spent the last week in Italy with the other Theology teachers I’m blessed to work with and some of our students (and parents) exploring the religious history (and pizza!) the country has to offer.  The trip was amazing.  But now I’m back baby!  As I’ve only begun to catch-up on all the news that happened while I was away, I’m nowhere near ready to do a New American Resistance piece yet.  Still, I wanted to write something after being gone for so long and Marvel’s latest universe-wide crossover event Secret Empire seemed like a good place to start.  I guess a guy can’t even leave the country for one week without Marvel launching into another mega-event…

My response to these universe-wide crossovers is always just don’t buy them.  I resent how these events a) force Marvel’s authors to stop/tweak the organic stories they are developing in their titles for contrived tie-ins and b) force their readers to buy dozens of extra books (amounting to hundreds of extra dollars) just to get the whole story.  That’s not fair.  The quickest and most effective way to let Marvel know we don’t want these type of universe-wide crossover events is to speak with our wallet.  Except…uh, here’s my dirty little secret…I kinda really want to read the Secret Empire series.  Aaagghhh!   What am I saying?!?

Now I stand by what I always say about these crossovers – they are an insulting shot at milking more money from fans of Marvel’s comics by tying all their titles together into one big story.  I resented Civil War II for those reasons and, as a result, dropped every title that played into it from my pull list (save Ms. Marvel and Spider-Man because I just love Kamala and Miles too much).  Nor are they necessary to tell this sort of story.  As a kid there were all sorts of “events” that didn’t spill out into every book Marvel had.  Unless I’m remembering it wrong, during the Infinity Gauntlet miniseries Spider-Man and the Hulk (and everyone else!) were present in the event title without stopping the individual stories in their own titles.  After the event finished, those story bits were just weaved into the main titles.  But that’s not how the game is played anymore and we’re all the worse for the change.

The thing is, I think the idea of Secret Empire has a lot of promise.  While I was never a fan of how they executed the idea of Captain America being a Hydra agent (doubling down on his always having been one instead of saying, “Well, just wait to see how this plays out…” seemed a cheap way to create shock and publicity for a title), it still has promise.  Yes, the execution insulted the 75+ year history of the character.  Still, the idea of this character who has always represented and fought for the best America has to offer being secretly corrupted by Fascist forces until he is unrecognizable (and the emotional fallout that comes from dealing with that) seems apropos.  Given the state of the United States of America, what can be a more important or more timely story?  It literally hurts me to read about Steve Rogers acting as a Hydra agent.  That’s why I don’t regularly read Steve Rogers: Captain America.  But, the 2016 campaign, the election, and the daily news hurt me too.  Handled correctly, I think the idea of Secret Empire has the power to speak to the times in as powerful an allegorical fashion as the original Civil War did in the Patriot Act era. 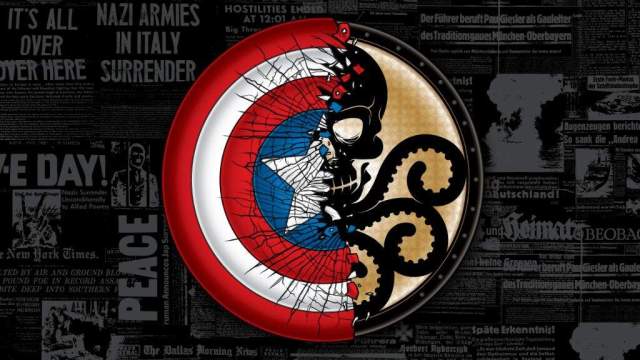 If there is any author Marvel has who would be capable of pulling this off, it’s Nick Spencer.  Alongside G. Willow Wilson, he’s one of Marvel’s best writers – seamlessly weaving politics and current events into his narratives, making parable and metaphor of superhero tales.  He’s turned Sam Wilson: Captain America into one of the defining commentaries on modern America while always honoring the roots of the character of Captain America.  And, as anyone who’s read comics before can attest, we all know Cap won’t be a Hydra agent forever.  Sooner or later (hopefully by the end of Secret Empire) he’ll be back to who he once was.  The restoration of the true Steve Rogers, and the entire Marvel Universe (Steve included) trying to figure out what went wrong and how to live in an era when the greatest among them could be so corrupted, has the potential to be a very powerful, very meaningful story too.

But how do I navigate this?  I don’t want to give my money nor my mental assent to yet another money-making gimmick on Marvel’s end.  Hell, Ms. Marvel has only finished up ONE story arc since Civil War II ended.  One!!!!  And now it’s time for Secret Empire.  Where is the time for the authors to let these characters grow and their world’s develop if they are only squeezing in tiny stories alongside the event-driven marketing machine Marvel’s running?  However, I also don’t want to turn away from an author I admire handling a story that’s in his sweet spot which has the potential to really speak to the times in which we’re living.  So I find myself on the horns of a dilemma.

Last week as I was enjoying pizza in the land of its birth, celebrating Easter Mass in Florence, learning that gondola drivers can be pretty sassy/grumpy in Venice, and finding a sense of spiritual nourishment in Assisi, Steve Rogers: Captain America #16 was released alongside Secret Empire #0 and the event officially began.  So what am I to do?  I don’t know.  It seems foolish to not read a story I’m intrigued in by an author I greatly respect on the principle that I don’t want to feed Marvel’s crossover habit.  On the other hand, I also don’t have the budget to drop what will literally be hundreds of extra dollars on the whole damn thing.  Can I just read the Secret Empire miniseries?  Do I need to look into all the titles in my pull list to see what needs to be cut on principle?  I don’t know…maybe it’s the jet lag but this all seems too tiring to consider.

(Here’s a little shout-out to my beloved The Unbeatable Squirrel Girl for never getting tangled up in these messes.  Go you!!!)

Ultimately, I did go to Books Galore (my local comic shop) this afternoon to pick up my file from last week.  While I was there…I caved.  I bought both Steve Rodgers: Captain American #16 as well as Secret Empire #0.  What can I say??  My love and respect for Nick Spencer as an author (not to mention Captain America as a character) outweighed my hatred of the needless, Mammon-worshipping crossovers.

The whole Secret Empire event follows Steve Rogers revealing to the world that he’s a Hydra agent and then using his connections/power as Captain America, an Avenger, and the Director of S.H.I.E.L.D. to bring the world to its knees under the rule of Hydra.  These issues look to set the stage for a very dystopian-esque story where the superheroes remaining free fight in the resistance against the forces of Hydra now ruling the world.  The issues I read certainly had the weight of setting up an epic battle.  And they had the moments of the insight I’ve come to expect from Nick Spencer (although not as constant as in his brilliant Sam Wilson: Captain America).

For example, in Steve Rogers: Captain America #16 Spencer has Baron Zemo taunt Bucky Barnes.  As Bucky tells him this isn’t really Steve.  Zemo replies, “Tsk.  Poor Bucky.  You still don’t understand do you?  Facts, reality — these things are simply what we make them.  I have decided what I believe.  And if the story Steven tells is a lie — then I will make it true.”  Our last election (with still-to-be-determined levels of Russian influence) legitimated the idea that we can will whatever the hell we want into truth by electing someone who does just that.  We can’t allow this to continue if we have any hope of functioning with grace, intelligence, or effectiveness in the world and having a super villain underscore the problem by espousing the mentality is great. 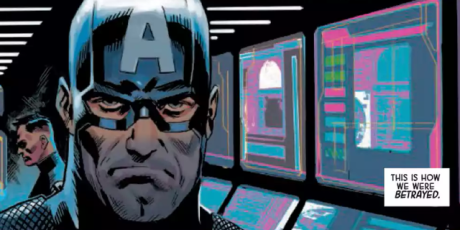 Then in Secret Empire #0, Nick Spencer gives a narration over scenes of Captain American beginning to execute his plan for Hydra domination which describes the rise of all fascist leaders.  He writes, “He was the greatest among us.  The one we looked to, to lead us and to guide us.  We were wrong.  We’d lost our way.  Mired in corruption and a thirst for power, divided by infighting, we’d forgotten our calling.  And in that moment, at our weakest, instead of challenging ourselves, instead of making things right — we simply gave him more power and more authority.  It was easier to let him do what which we were too weak to do ourselves.  And this is the price we paid….He had always been a master strategist — but freed from compassion and mercy, this was his masterpiece.  It was a perfect attack.  Already divided, we found ourselves pulled in so many directions at once — that our best was no longer enough.  We had stood for so long, we didn’t even know what it felt like to fall.  But fall we did.  This is how we were overwhelmed, and overrun.  This is how we were betrayed….We didn’t know it then, but this was the moment it all ended.  The moment we compromised everything we believed in — in the name of our fear.”  Not only is he speaking of leaders like Hitler, Stalin, and Mussolini, he’s also outlining much of what drove the 2016 election – fear and an inability or unwillingness to see what was really going on.

So I see great potential here but…I don’t know.  Maybe it is the tiredness from the trip but I’m still not sure if Secret Empire grabbed me the way Sam Wilson: Captain America always does.  Maybe I’ll read until the Free Comic Book Day issue?  See if it grabs me by then?  I’m living in the Trump Era now and this story feels too important to pass up.  But, importance aside, the comic budget is limited so I refuse to buy any tie-ins I don’t normally read.  Nor will I buy a bi-monthly series (at $4.99 or $3.99 an issue) that I’m not in love with.  However, I’ll always bet on Nick Spencer so if the miniseries doesn’t grab me within the first few issues, I’ll happily wait for the trade paperback.

Okay…now I’m going to go nap (again).  Hey, doing six cities in six days (with two and a half days spent in Rome, meaning multiple cities on certain days) and keeping an eye on forty-eight high schoolers and parents can take it out of you.  So, yeah, nap time it is.  In fact, it might be one of those naps that just ends tomorrow morning!