It’s been a bit busier again since the school year resumed so I haven’t had time to do a Top Five Wednesday post in a few weeks.  Isn’t it annoying how, you know, regular work days can interfere with reading and writing?!?  But such is life I suppose :).  Well, to close out September the T5W Goodreads Group (created by Lainey of gingerreadslainey and now moderated by Samantha of Thoughts on Tomes) has requested we fine participants cobble together a list of five great gateway books to our favorite genre.  Curious what made the cut?  Well read on!

When I was first perusing these topics back at the beginning of September I thought this was to be five books to serve as a gateway to five different genres.  I was excited!  So, once I realized my mistake, I was a little bummed.  But the disappointment only lasted a few moments.  Then I thought, “You know, this is primarily a blog about comic books so maybe it would be wise to do a post on great comic books for people who’d like to jump in.”  This way the list can help both those who are new to comics and excited to find someplace to start OR people who love the genre and maybe are looking for something new to toss on the ol’ pull list.

While comic books aren’t technically my “favorite genre” (which, to be honest, is a tricky question as I tend to be a mood-reader), I still love ’em.  A lot.  So here are my suggestions for five AMAZING comic books to serve as a gateway into surprisingly great literature, a fantastic hobby, and (if you’re lucky) a burgeoning lifelong obsession!  I feel each book honors what’s classic about comic books while also elevating the medium to someplace entirely new in their own unique way.

5)  Ta-Nehisi Coates and Brian Stelfreeze’s Black Panther (Marvel) –  When the book debuted in April of this year it came with A LOT of hype around it.  Impressively it’s not only lived up to that hype but exceeded it.  In Ta-Nehisi Coates’ capable hands the story of T’Challa and Wakanda became a narrative as ideologically challenging as it is beautifully poetic.  The story wrestles with the nature of a just government, terrorism, identity, racism, imperialism, seeking national stability, and the place a monarchy (no matter how enlightened) can hope to hold in our modern world.  It is an exciting superhero story that isn’t afraid to make you think along the way.

When I read this comic I have to do it slowly, sitting not only with the captivating images but with the philosophically rich narrative.  This is a comic that engages the mind as well as the heart.  Each week it comes out, I always save it for last in my stack of new comics to read and I wait for a quiet moment to read it.  I don’t think there’s any other comic on the rack right now that’s doing quite what this book does.  And what it’s doing is important.  Hopefully it’s also opening the door for more comics to tell this sort of story too. 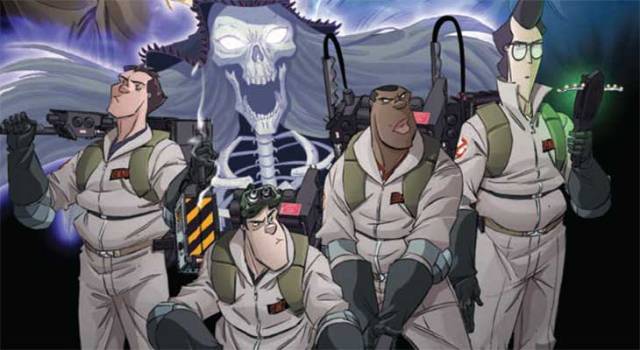 The comic is great for newbies because it’s self-contained and it never fails to be one of my favorite reads every month.  And there’s no other comic on the shelf, in my mind, with a better cast of characters.  Sure Ray, Peter, Egon, and Winston are there, as is Janine and even Walter Peck.  But I’ve come to love all the characters Erik Burnham has added to the universe as much as I loved the characters I first met in the films and the cartoons!  They fit so perfectly.  It’s fun, funny, intelligent, and exciting.  Dan Schoening’s magnificent art captures the fun and feel of the world of Ghostbusters while being expressly his own, never feeling derivative or like it’s some sort of caricature.

3)  Tom Waltz and Kevin Eastman’s Teenage Mutant Ninja Turtles (IDW) –  Similarly to the Ghostbusters titles, IDW’s Teenage Mutant Ninja Turtles offers a large cast as eclectic as they are engaging.  In fact, IDW’s recently released a second monthly title TMNT Universe to expand the narrative spotlight.  In this side title you essentially find short stories focusing on the Turtles and all who fill their world.  The best part?  It doesn’t appear to be a crossover machine!!  You can read it if you want but it isn’t designed to force its way into your pull list so you can understand the main title.  Teenage Mutant Ninja Turtles deserves your readership for that respectful move alone.

In Teenage Mutant Ninja Turtles Tom Waltz has taken something so personal and utterly familiar to me and managed to make it seem vibrant and new every single month.  These are the Turtles I grew up with…but they are also SO MUCH more.  The emotional landscape of these stories run deep.  Yes, these Turtles and those who fill their world eat pizza and crack wise but they also feel, hurt, dream, grow, and break.  The comic wrestles with challenging ethical issues, incorporates theological themes, and is uncompromising in its drive to touch the reader’s mind, heart, and soul with each issue.  I read the first trade paperback…and then used more cash than I’d like to admit amassing all the TPBs to get caught up.  Simply put, once I started this series I couldn’t stop.

If you’d like to read more of my raving about this series, please click here or here! 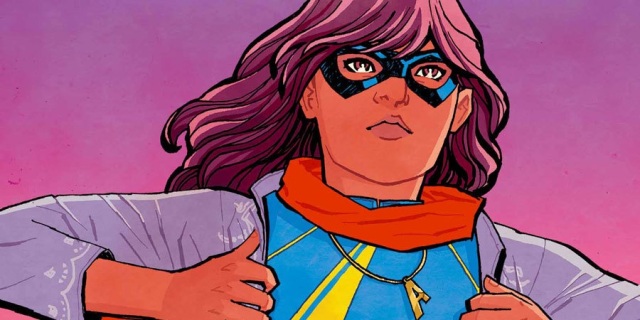 2)  G. Willow Wilson and Takeshi Miyazawa’s Ms. Marvel (Marvel) – Let’s say this right out of the gate, this title could have made a STRONG push for #1 on the list if it wasn’t for its always being tied into the bigger Marvel Universe crossovers.  I’ve written before how those annoy me.  They seem to be a cash grab and the story almost always suffers as a result.  But, that side frustration aside, absolutely everything about Ms. Marvel is perfect.

Simply put, I don’t think there is a more important comic book being published right now.  You get all the traditional (and wonderful!) superhero mainstays with Ms. Marvel – the challenges of watching a high schooler try to balance a family life, school work, and the trials of being a superhero.  Yet you also get a moving exploration of what it means to be family and a beautiful (and accurate!) depiction of Islam and what it’s like to live as a first generation Pakistani-America.  In 2016, with the country as it is now, the importance of this can’t be overstated.  Equally important is the fact that Kamala Khan is an intelligent young girl, routinely using her knowledge of physics as much as her powers in her battles.  We need more characters like her!  Perhaps best of all, Kamala Khan is a HUGE NERD.  Before and after she gained her powers and became Ms. Marvel, she wrote superhero fan fiction, watched and referenced Star Wars regularly, and lived for/obsessed over comic books.  As a reader, it’s so easy to connect with her.  She’s a comic nerd who becomes an actual superhero.  And we get to go along for the ride.  It.  Is.  AWESOME.

If I’ve piqued your interest, you’re welcome to read more about Ms. Marvel here too. 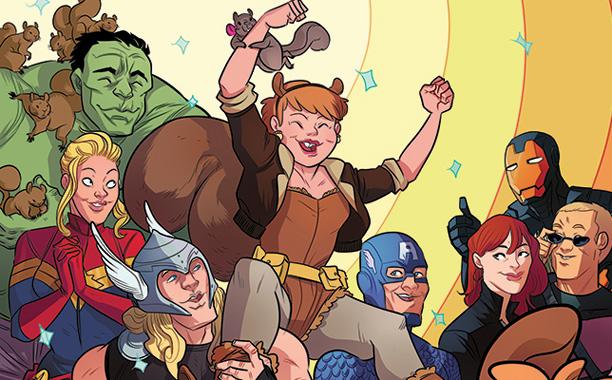 1)  Ryan North and Erica Henderson’s The Unbeatable Squirrel Girl (Marvel) – Okay, how about you just don’t even bother to read my post and go to your local comic shop and just buy The Unbeatable Squirrel Girl right now?  How does that sound?  There’s nothing I can write that can compare to the brilliance of this comic.  Still reading?  Okay, I guess that would be a bit of a cop out on my end.  Anyway, how about this?  Doreen Green is a computer science major (giving young girls an awesome role model to look up to in regard to being intelligent, competent, and strong) who has a realistic body with curves that is not presented in any sort of sexually objectified way (fighting the cultural trend of showcasing women as male sex fantasies) and who – more often than not – can figure out a way to solve her battles with her foes by becoming friends as opposed to punching her enemy until they can’t get up (thus brilliantly subverting the myth of redemptive violence).  This book couldn’t possibly be more brilliant in what it does with the idea of a superhero comic book!

If that wasn’t enough this comic is fun.  Is zany the right word?  Her heroic efforts against the forces that threaten the world are fast, fun, and (I’m sticking with) even downright zany.  It is, easily, the funniest book I read every month prompting several honest laughs out loud pretty much every page.  The humor is incredibly intelligent too.  BUT it isn’t a book only for adults.  My best friend Kelly reads it with her five year old daughter…and she immediately become obsessed with Squirrel Girl!  But Kelly loves it too, each finding different parts of the narrative funny and/or engaging.  The comic is as enjoyable for adults as it is for kids AND can serve as a great bonding experience for parents and children.  I think that’s important.  Comic books should always be a medium for kids first so I really value a book that I love as an adult but I know kids can fall into the story and love it too.  And when you read this comic you can feel its brilliance radiating out of every facet of the story.  Every panel, every picture, every action of every character, every line, every joke, every idea, everything about this book always feels 100% unique.  Ryan North and Erica Henderson manage to honor everything that’s great about comic books while taking their story to places I never expected a comic to go.  I promise you…read this book and you will not be disappointed.

Well folks, there you have it.  But remember!  Today isn’t just a Top Five Wednesday…it’s also New Comic Book Day!  So why don’t you all celebrate by heading down to your local comic shop and giving one of these fantastic titles a try.  For real!  I really think you’ll like them.