On a non-Top Five Wednesday related note, it’s Mom’s BIRTHDAY today!  Yay!  With that being said, there’s all sorts of celebrating to do…which will actually be super welcome since writing this post has made me really annoyed.  You see, this week, the T5W Goodreads group‘s challenge was to discuss your top five UNLIKABLE characters.  Now, the trick was they weren’t to be villains per se but rather protagonists and/or side characters who are unlikable.  With that being said, let’s just go and get my controversial choice out of the way first… 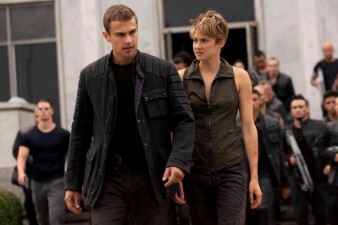 …I can’t even remember these characters’ names, for real / Photo Credit – The Divergent Series: Insurgent

5)  The ENTIRE CAST of the Divergent Series – I know, I know…this series has legions of supportive fans.  And I wholly grant that I am one of about only six people in the whole wide world who didn’t like this series.  (In fact, if I’m being honest (which, obviously I’m doing because this is an honesty-parenthetical-aside) I never read the whole series.  I could barely get through the first book.)  But I just didn’t like it.  And I’m not someone who hates YA novels either!  Of course I loved Harry Potter.  I read Twilight and it was the perfect mental break during the months I was researching and writing my Master’s Thesis.  I couldn’t have been more impressed (and remain so) with the power and the message of The Hunger Games.  And the theological/mythological awareness – brilliantly cutting across traditions!! – of The Mortal Instruments is still with me.  But I couldn’t stand anything (or anyone) in Divergent.

It was so bad (and I feel horrible admitting this) I was happy when characters died.  Each death in the book provoked in me a sigh of relief.  “Whew,” I thought, “there’s one less character I have to keep track of.”  Again, I know I’m pretty much alone in this but there wasn’t a single character in the whole book that I cared about enough to worry if they’d live or die.  Everything about them seemed annoying, contrived, and derivative (in the worst kind of way).  I was so happy when it was over.  Right now, I couldn’t tell you a single character’s name from the story and I read the whole first novel.  I’m sorry world, please forgive me.  But I’m being honest! 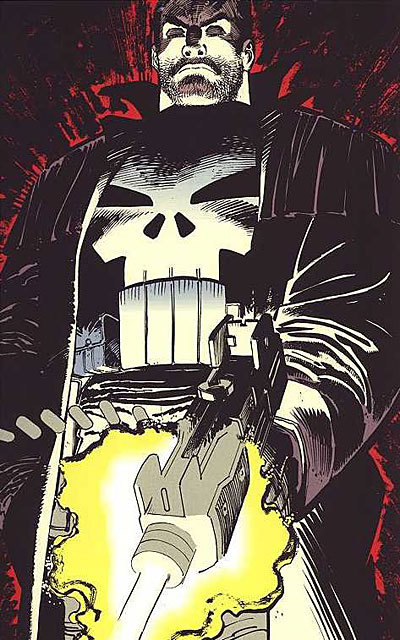 4)  Frank Castle, the Punisher – before I enter my rant here, I want to be clear I am not talking about Jon Bernthal’s portrayal of the character in Season Two of Daredevil on Netflix.  I thought in the context of the narrative of the show, the character, his actions, and his emotional journey were presented in a brilliant and thought-provoking way.  But, in general, the character’s never really done it for me.  I know, I know…I was reading comic books in the 90s.  It was the height of the anti-hero thing.  Venom was a “good” guy.  The Spirits of Vengeance were roaming the night.  The list goes on and on.  But the Punisher was the granddaddy of them all.  What annoyed me so much with the character?  Well let’s start here…he’s a bad guy.

The basic setup of Frank Castle’s story is emotionally charged.  His family’s murdered by gang violence and he, as a broken man, goes to seek vengeance by waging a one-man war on crime.  But at the end of the day, he’s just a killer.  Even if he kills under his own sense of justice, he’s still brutally taking human life.  He is judge, jury, and executioner…and people love him for the guns he wields and the death he brings.  Sure, we see Frank Castle reflected in the 1980s Death Wish and Bernie Goetz mania.  But he’s always felt…out of place amongst Marvel’s heroes.  For me, it’s because he isn’t a hero.  Looking at him as an adult in 2016, I’m even more annoyed by him.  Gun violence in the United States is raging across the country.  People die every day, needlessly, because of the guns on our streets.  Is the Punisher the type of “superhero” we need?  No.  Rarely, when we look at him, do we see a broken man in desperate need of healing.  Rather, we see a champion worth cheering on.  Nope…no thank you. 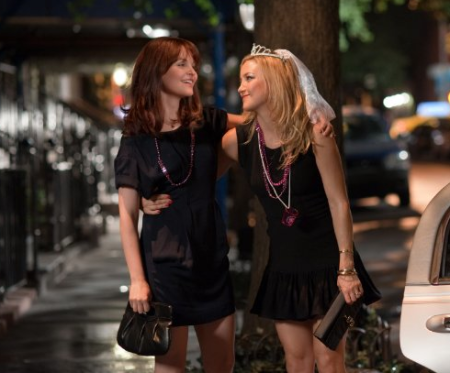 3)  Rachel White in Emily Griffin’s Something Borrowed – there is this weird trend in popular culture of an author creating these HORRIBLY UNLIKABLE PROTAGONISTS and then we’re supposed to root for them.  Rachel White is a perfect example.  She is a narcissistic, shallow person and an absolutely terrible friend. The basic setup for the book is, at Rachel’s 30th birthday party, she gets drunk and tells her best friend Darcy’s fiancé that she’s always been into him.  Turns out, he likes her too, they hook up, and everything goes to hell.  Every damn page made me like her less.  I wanted to root for her!  I did!  But she was as bad as Bradley Cooper’s character Eddie Morra in 2011’s Limitless.  The guy was an enormous douche bag.  I literally couldn’t have cared less about what happened to him.

I had no problem with the setup for this book.  (And, against all odds, I read the sequel and ended up LOVING Darcy as the lead.  Something Blue was a fun, funny story with real emotional depth. )  The setup for Something Borrowed seemed to have so much potential.  The idea of finding, let alone chasing, love in such complex/taboo/forbidden situations can make for a captivating story.  I’ve written before how much I adore Tom Stoppard’s play The Real Thing which explores the topic with real emotional gravity.  And Daniel Radcliffe and Zoe Kazan’s 2013 film What If explores the same sort of topic in a fun, quirky, indie movie sort of way.  But the way Rachel was written just drove me crazy!  I didn’t care if she got the guy.  I didn’t care where her life went.  I just kept thinking Darcy needs/deserves better friends.

Sam “oops…is there more to being a detecive than drinking and shooting things?” Spade / Photo Credit – The Maltese Falcon

2)  Sam Spade in Dashiell Hammett’s The Maltese Falcon – I know it may seem weird to include the lead character/detective in this 1929 noir classic on a list like this.  After all, The Times Literary Supplement (London) called this novel, “probably the best detective story we have ever read” and “an exceedingly well written novel.”  Well, I didn’t get that.  I was excited to read this too!  Whenever you get to read a classic novel you’ve always heard about, it’s an exciting moment.  And I had just finished up Sir Arthur Conan Doyle’s The Complete Sherlock Holmes so I was even more excited to dive into another classic mystery story.  But Sam Spade is no Sherlock Holmes.  In fact,  Sam Spade is a boozy, womanizing hack.  There!  I said it!

Not everyone can be like Sherlock Holmes, I get it.  That’s why he’s Sherlock Holmes!  But after being so immersed in his methods of meticulous analysis, Spade frustrated me on every page.  He was far more concerned with drinking and getting laid than he was with any sort of investigation.  Given his technique, I got the feeling that he basically solved all his cases by luckily stumbling into the answer.  The man tramples crime scenes, contaminates evidence, overlooks all but the most obvious clues…basically he takes the bull-in-a-china shop approach to examination.  Had I read this before ever meeting Sherlock Holmes and Dr. Watson I probably would have enjoyed it.  But having read this in the wake of Sherlock Holmes, Sam Spade will forever be tainted in my mind.  Gah…he drives me crazy (and not in a fun, Fine Young Cannibals sort of way).

1)  Borsk Fey’la the Bothan Senator in the Star Wars Expanded Universe – as my friend and fellow Star Wars fanatic Hannah is fond of saying, we are EU babies.  We grew up in a magical time when, before the Prequel Trilogy arrived, the story of Star Wars was being kept alive in the Expanded Universe by incredibly talented authors like Timothy Zahn, Kevin J. Anderson, Kathy Tyers, and Steve Perry to name a few.  Then, when the Prequels arrived, the continued to expand the story, incorporating all of that new information as well.  They gave Star Wars fans some brilliant characters, a select few every bit as engaging and exciting as those George Lucas brought to life on film.  We have Grand Admiral Thrawn, Mara Jade, Captain Gilad Pellaeon, Admiral Natasi Daala, Talon Karrde, of course Jaina and Jacen Solo, Lowbacca, Prince Xizor…and then we have this fucking Bothan.  Ugh…how I hated him.

Do you remember that line in Return Of The Jedi?  Speaking of gaining access to the information regarding the location of the not-yet-complete second Death Star, Mon Mothma says, “Many Bothans died to bring us this information.”  Well Borsk Fey’la was a Bothan senator in the New Republic who never let anyone forget that Bothans died helping bring down the Empire.  This annoying, arrogant, seemingly-omnipresent pain in the ass was always there to be the stick in the spokes of whatever important action Leia was trying to accomplish.  In the timeline of the Star Wars story this guy used the “Many Bothans died…” shtick to insert himself and enforce his will into sooooo many different situations for literally decades.  I remember gritting my teeth when this guy would show up in any of the Expanded Universe novels.  I started to wish some rogue bounty hunter would take him out.  At my most annoyed moments, I’d found myself wishing all Bothans died to help bring down the Death Star.  At least that way Borsk Fey’la could have be useful.

Okay, I need to stop now.  Writing this post has had the unexpected side effect of making me very annoyed.  Reflecting on which characters to pick, choosing the ones who I found most unlikable, and then writing about why they were so unlikable to me has legitimately left me edgy and frustrated.  Grrr.  I guess that means I picked good choices though!  Okay, I need to go do something fun before I head to wish Mom a “happy birthday.”  I need to mellow again.  What do I do?  Oh!  It’s new comic book day :).  Off to the comic store I am!  See?  I’m feeling better already!