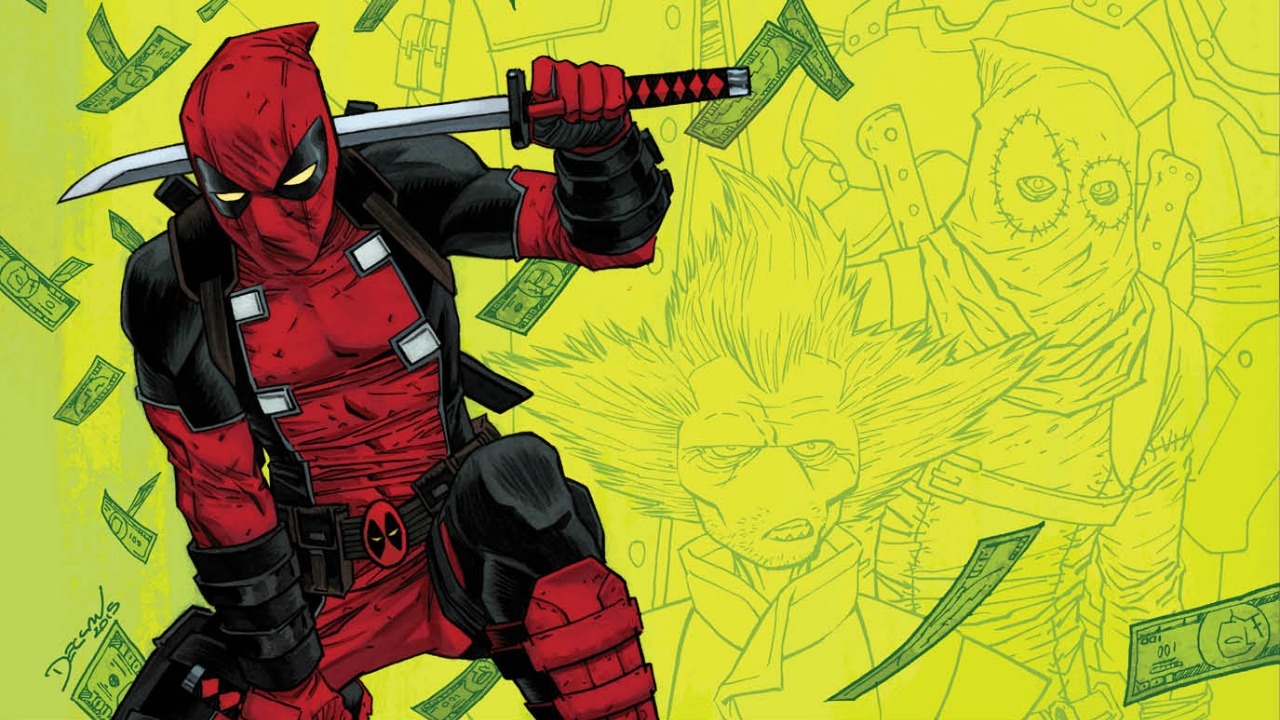 Ahh…summer vacation.  My final exams are all graded.  My grades are all posted.  And now my mind can gently turn from lesson planning and grading to the freedom of summer.  There are lots of novels to read, movies to watch, sun to bask in, and family and friends to see…but it also means there’s a lot of time for writing and comic reading!  Given how much fun I’ve had since I started blogging, I’ve decided to see how often I can post on My Comic Relief through the summer holiday.  I’ve no set goal in mind, only the challenge!  My question now becomes – is there a better way to ring in summer than with Deadpool’s Mercs for Money??  I say there isn’t! 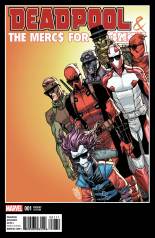 It’s no secret I’m a huge fan of Cullen Bunn’s writing – especially his work with Deadpool.  I’ve written about his work with horror (and Deadpool and zombie) comics here and here.  I’ve also written about all three parts of his intimidatingly ambitious, postmodern masterpiece Deadpool’s Killology here, here, and here.  While all of those works present Deadpool’s trademark wit and irreverence alongside thoughtful examinations of social justice issues and searing social critiques, Deadpool & the Mercs for Money is a different side of Cullen Bunn’s writing.  It’s just FUN.  While I love (and often need) comics for their layered and metaphorical explorations of the human condition, sometimes a healthy dose of fun is exactly what I’m looking for!

In my opinion, Deadpool’s at his best when he has someone to bounce off of.  That’s one of the things that makes Spider-Man/Deadpool so great and it’s something that’s been missing from the main title since the first post-Secret Wars story arc.  Actually, since Brian Possen left, Deadpool hasn’t felt the same.  The humor’s a little off but the MAJOR issue is his supporting cast.  There’s no Shiklah, no Preston, no Ellie…and I miss them!  In Deadpool & the Mercs for Money we find Deadpool, now crazy wealthy coming from his popularity boom (which inexplicably happened during the eight month time-lapse between the (new) Secret Wars ending and the All New, All Different Marvel Universe beginning).  With his newfound wealth, Deadpool leads a team of mercenaries who help with the growing demand for his services.  The outfit includes Solo, Foolkiller, Stingrey, Terror, Masacre, and Slapstick (the living cartoon).

Incidentally, I love that Slapstick is here!  I remember being fascinated by the character as a kid when I first found him care of some Marvel Universe trading cards (they were the kind that ranked everyone’s powers on the back – David and I were obsessed with them!).  The idea of a “living cartoon” was so cool!  His presentation here, as a man with the powers of a cartoon, but with a complex and all sorts of anger issues stemming from the fact that he’s not “a real boy” is a really clever take on the character.  Something goofy becomes something tragic and heartfelt.

I intentionally refer to the Mercs for Money as an “outfit” and not “team” here.  These guys aren’t really a team.  They’re just a bunch of people who work together.  They don’t really care for their boss and they kind of hate their job.  They do what they do for the money, not the cause or camaraderie.  They routinely bicker too, a regular source of the five issue miniseries’ fun and humor.  Deadpool offers his regular rapid-fire feast of one-liners and pop culture references, but what makes this series different is how everyone else attempts to deal with Deadpool.  Everyone (not so secretly) wishes that Deadpool wasn’t there.  And they especially wish he wasn’t in charge.  But Deadpool’s got the money…and these guys need a job.

While much of the humor revolves around Deadpool being the (absolutely horrible) boss for this team of grouchy misfits, the plot revolves around a robot that can (supposedly) predict the future.  Deadpool and Co. are hired to steal it for a mysterious third party…but when the handoff goes south (and they realize what they have) Deadpool decides to auction it off to the highest (super villain) bidder.  As one may expect, disaster and hijinks ensue.

Deadpool lays back, leaving the disaster and hijinks to the others / Photo Credit – Marvel Comics

I love this “superhero” version of a bunch of guys who kind of get along, doing a job they don’t like for a boss they don’t respect (or even trust) because they need the paycheck at the end of the day.  It’s a hilarious framework for a story and it’s a prime example of art reflecting life.  We’ve all been there.  Most everyone can think of a job they didn’t like that they kept too long because they needed it or a boss that does little but frustrate you.  And often the best part of the workday (or at least the part that creates the most lasting memories) is making sarcastic and/or inappropriate jokes with your co-workers about the ridiculous nature of your job and those around you.

That is EXACTLY what you find between the covers of this comic.  In many ways, Deadpool & the Mercs for Money is (surprisingly) like a bizarre funhouse mirror reflection of the same relatable daily grind hilarity that first drew viewers to NBC’s epic The Office.  Even though this incarnation of that idea features a group of C-Level characters following a crazy boss through all manner of over-the-top situations filled with comic book madness…you kind of get where they’re all coming from just the same.

World’s most inspiration boss?  Eh…you should judge for yourself / Photo Credit – Marvel Comics

The series is filled with some excellent running gags.  I love that they don’t translate for Masacre who speaks entirely in Spanish!  (The editor’s note at the top of a full page of Spanish text is “Yeah, this is a lot of Spanish!  Don’t understand it?  Go make a bi-lingual friend!”)  It’s great that Deadpool continues to think Masacre agrees with everything he says and does…since he doesn’t speak Spanish.  Stingrey’s constant referencing the fact that he was an Avenger (and the implied pain that he’s now working for Deadpool doing jobs like this) is fantastic too.  But, at the end of the day, I like how familiar these characters and their situation feels…even while engaging in wild comic book adventure shenanigans.   That’s the best part.

Deadpool tries to rally the team..to little avail.  But, as the issues progress, so too does their bond with each other.  And as a reader, I found myself liking and connecting more to these characters as the series progressed as well.  While it may not be overflowing with social justice issues or rich in academic ideas to deconstruct, Cullen Bunn still gives his readers fleshed out characters who feel familiar and who you want to spend more time with.

I’ve written before about my need to keep an eye on my monthly pull-list (so I don’t end up spending waaay more on comic books than I should).  But I was elated when I found out that Cullen Bunn’s Deadpool & the Mercs for Money was going to become an ongoing monthly series as of July!!  Once tough decisions have become easier.  I can say goodbye to the bi-monthly Deadpool main title to make room for Spider-Man/Deadpool and Deadpool & the Mercs for Money.  It’s all the Deadpool goodness I love in the best possible packaging.

Plus, after meeting the Mercs for Money in the main title and getting to know them so well over this miniseries, I can’t say goodbye to these guys!  In the hands of Cullen Bunn, they’re just too interesting to leave behind. 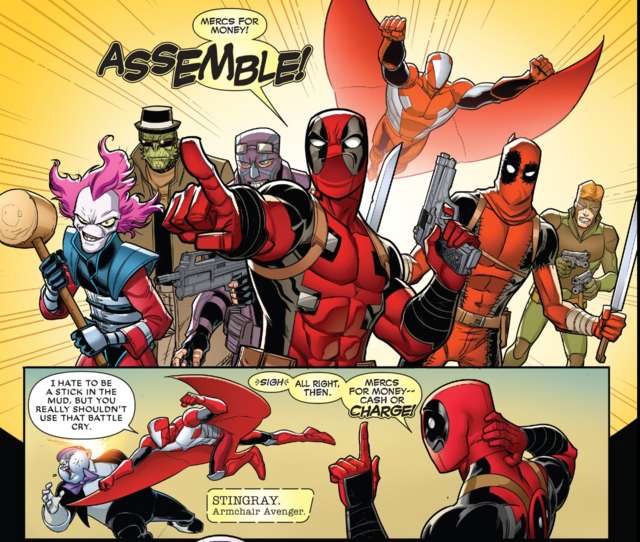 2 thoughts on “Deadpool’s Mercs are Worth the Money!”