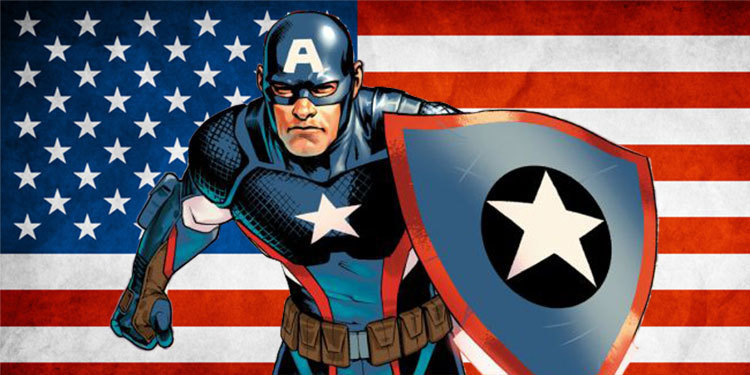 Before we begin, let me make two things clear.  First, this will be a TOTALLY spoiler-filled post about Captain America: Steve Rogers #1 which went on sale today.  So, if you don’t want it spoiled please, please, please don’t read this!  Second, this is my complete, emotional knee-jerk reaction to the comic.  It won’t be a long, thoughtful post.  This is a short discussion of my immediate reaction.  But I had to say it all the same.  Are you still with me?  Okay…

Alright, so that picture was there to make certain no one glanced at any spoilers accidentally before they had the chance to leave.  BUT if you’re still here and you’re still reading you’ve either a) already read Captain America: Steve Rogers #1 which was released today or b) you’re cool with massive spoilers.  Are we ready?  Okay…let’s proceed.

Today I was at work when Jeff sent me a link.  It was a Yahoo! article that discussed the crazy twist in today’s new Captain America: Steve Rogers debut.  I read the article (I haven’t read the comic (nor do I think I will)).  And I couldn’t believe it.  So I went to Time‘s article on the matter…and I read the exact same thing.  And they interviewed both Nick Spencer (the author of the Cap titles) and Tom Breevort (Marvel executive editor).  So, to keep track – it’s Cap’s 75th anniversary, there’s a brilliant and layered film starring him presently in theatres, and the “Standoff” storyline returned both the Super Solider Serum and youth to good ol’ Steve Rogers.  Oh, yeah, and apparently he’s been working for the Red Skull for as long as he’s existed.

That means everyone who excitedly picked up Captain America: Steve Rogers #1 had the fun journey from this: 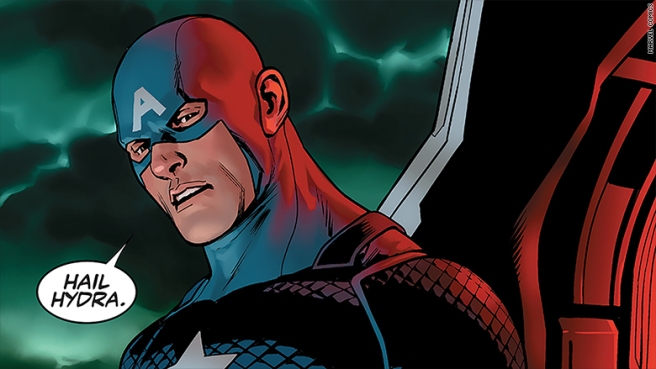 So every comic, every mission, every moment in Marvel’s history Steve has apparently been a double agent, secretly serving Hydra’s goals in the world.  Let’s forget for a moment that Cap always defeats Hydra (soooo not a great double agent).  But that means when Cap was defending civil liberties during Marvel’s “Civil War”…he was doing so because it helped Hydra’s greater goals.  When he lead the heroes of the Marvel universe to rally and do the impossible to protect all of creation during the Secret War, the Infinity War, Onslaught’s invasion, and so on…he was doing it for Hydra.  When he lifted Thor’s hammer Mjölnir proving he was one of the few people in the universe worthy enough to wield it…he was doing what Hydra does.  Well, that means either the idea that Cap’s always been a double agent for Hydra DOESN’T MAKE ANY SENSE AT ALL or Hydra’s really not that bad.  If it’s the latter, then go Hydra.  Or, as Jeff corrected me when we were discussing this earlier today, Hail Hydra.

Despite my strongly being a member of Team Iron Man, I still love Captain America.  And I have great respect for what he represents in the Marvel Universe.  To put it directly, Captain America is important.  Cap is the moral center.  He is incorruptible.  He is the model we’re all supposed to strive to emulate.  As a guide, Captain America represents the ultimate mythic teacher.  He is as near-perfect a human being as we can imagine.  To state the obvious, to try and say he’s been a Hydra agent all along undercuts everything.  This ruins not only seventy-five years of Cap comics, it ruins his mythic importance.

I have been reading a lot about Nick Spencer’s run on Sam Wilson: Captain America.  I’ve been very, very intrigued by his exploration of such important contemporary political issues, ranging from race and immigration to economics.  I was this close to buying the trade paperback and giving it a shot.  And now this?  I’m not sure, as interesting as the stories seem, this is an author I can get behind.  If it’s all meant to be a commentary on Trump’s presidential campaign (as the Time article implies) then this was the wrong way to go about it.  You don’t tie Marvel’s moral core to something like that to make a point.  If it’s an example of the type of writing problems that often swirl around Superman (the idea that you can’t write an engaging story about someone so morally pure), well that speaks more to the writer’s abilities and/or interests than it does to the character.  We’ve five amazing MCU films illustrating just that…not to mention the decades of comic books doing the same.  Cap works.  And we love him for it.

Yes, I know that this will all be retconned away in a year or two.  It’s mind control.  It’s reality altering.  It’s…whatever.  But it doesn’t change the fact that, in this moment, Marvel and Nick Spencer have turned their back on what makes Captain America who he is.  And in so doing, they’ve taken not just what we expect from the character, but what we need from him.